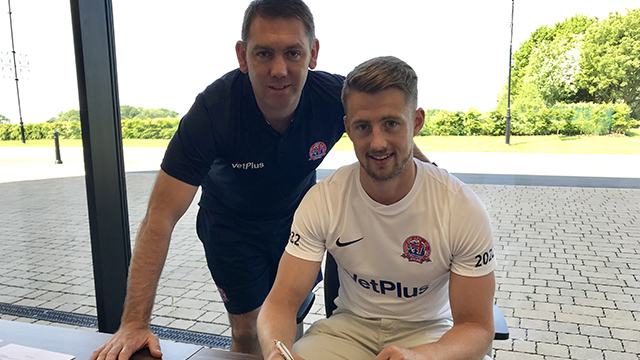 The 25-year-old former Republic of Ireland youth international swapped Gateshead for the Fylde Coast last week, penning a two-year deal with the club.

Whilst admitting there was interest in his services from elsewhere, a chat with Coasters manager Dave Challinor left Byrne in no doubt of his preferred destination.

Byrne said: “I was over in Ireland when I got a phonecall from my agent to say Fylde had been in touch and were interesting in speaking to me.

“There was interest from other clubs, but once I knew Fylde were interested that was the only place I wanted to go.

“The manager spoke about what he expected from me and his ambitions for the season and I was sold.

“He talked about last season and how he wanted to improve on that and go one better. Everyone can see the ambition of this club and it was something that really excited me.

“The new stadium, the fans, the progress – it ticked every box for me. After the meeting I just wanted to get it all sorted as soon as possible.

“You don’t really expect facilities like this at National League level. Just walking through the doors and into the reception, seeing the pitch and the stadium, I could tell it was a club going places.

“It’s a big project and an exciting one to now be a part of.

“I spent a year with Gateshead and had a good time up there as captain, but it was the right time for me to move on. When a club as big as Fylde came in, I just couldn’t say no.

“It’s the right move for me and my family and I jumped at the chance.

“Gateshead offered me a new deal and wanted to keep me, but I had my heart set on Fylde as soon as the initial interest came through.

“I wasn’t interested in joining any other club once Fylde came calling.”

The former Nottingham Forest trainee helped Gateshead to a rare goalless draw at Mill Farm back in October and admits that he was impressed with the Coasters during their debut season in the National League.

Byrne added: “It was a memorable day for me because it was my first trip to Mill Farm plus our manager Neil Aspin had left for Port Vale that day.

“It was a drab goalless draw but it was a good result for Gateshead at the time.

“I saw Fylde’s style of play first hand and it was very appealing. When we played at our place later in the season I thought Fylde were very structured and organised.

“It was probably the best performance I saw at our place all season and I was very impressed.”

One player who stood out that day was Fylde frontman Danny Rowe, who netted both goals in a 2-1 victory on Tyneside, and Byrne is relishing playing alongside the National League Player of the Year.

“Everyone knows that Danny Rowe is a great player and he has been banging the goals in for a long time now. He is one of the best strikers in the league, if not the best.

“It was good to play against him but it will be even better to train against him every day. Training with players like that can only help you improve.”

Challinor troops came agonisingly close to their Football League dream last season, suffering Play-Off heartbreak, however Byrne believes the Coasters will have what it takes to challenge at the top.

“I think that is the ambition of every player in this division. Everyone wants to get into the Football League and progress their careers.

“Having seen Fylde narrowly miss out last season, hopefully we can push on and achieve promotion next year. That has to be the ambition of every single player in our dressing room.

“I don’t feel like there was a stand-out team last season, every game was tough. Now we have Chesterfield and Barnet coming down, plus Salford and Harrogate coming up who are both financially very stable.

“It will be a very difficult league that will test us in every game, but it’s one that we should be looking forward too.

“Listening to the ambition of the manager, I don’t see any reason why we can’t do very well.”

First name on the team sheet for ‘The Heed’ last season, Byrne now hopes to become a mainstay in Challinor’s plans.

“I’m still young and I have a lot to offer, but I still want to improve.

“I like to think I’m comfortable with both sides of the game as a defender. I’m a decent size and good aerially, but I also like to get the ball down and play. I’ve also had plenty of experience already for my age.

“One thing I can guarantee the fans it that myself and everyone around me will be giving 100% in training and on matchdays.

“I have come here to progress and play games. I played 51 games for Gateshead last year and managed to stay injury-free and that’s what I expect this season too.

“There will be competition for places but that’s healthy. I don’t think I’ve ever been at a club where their wasn’t competition.

“It’s what drives you on, but I want to play every game and it’s up to me to impress the gaffer and make sure, come the first day of the season, that my name is on that team sheet.

“I will enjoy the summer, but I’m really looking forward to getting stuck into pre-season in a few weeks.

“I will be coming in on the first day of training raring to go having heard what the gaffer has planned for us. I’m ready to give anything.”