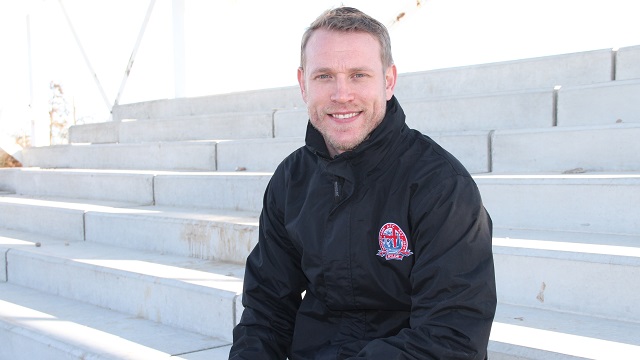 AFC Fylde Chief Scout Alex Hay admits his mobile phone has taken a hammering over the past few weeks as the Coasters look to strengthen their squad ahead of the new season.

“The close season is actually the busiest time for me,” said Hay, who started last season in a similar role at fellow National League North club Stockport County.

“I’m constantly on the phone speaking to agents, players and managers – it is non-stop really but it’s a part of the job that I really enjoy.

“It’s exciting speaking to players and setting up meetings and then selling the club to them.

“I have had plenty of discussions with the manager and the chairman since I joined a few months ago about what we were looking to do and we drew up a list of targets.

“I am always setting up meetings but at the end of the day it’s down to the manager and chairman to make the final decision on players.

“Going full-time has been a massive positive but at the same time it has ruled out a certain players during that process because they aren’t able to commit.”

Whilst rival clubs have been quick to dip into the transfer market, Hay admits the Coasters have been more cautious in their approach.

“A lot of clubs have made signing quite early this summer but we held off until we knew what position and division we would be in. We couldn’t tell players exactly what we wanted to do until we could make an informed decision ourselves.

“Other clubs are paying crazy amounts of money but we won’t be doing that and we won’t be held to ransom.

“We are still speaking to lots of players but we just aren’t in any rush. It is important to us that they want to come here for the right reasons. The players won’t be coming here for money, they will be coming to develop and help us on the journey to where we want to be.

“There is a lot of work put in behind the scenes looking into the background of players and speaking to people who have worked closely with them.

“I know fans want to know names straight away but we won’t be making any rash decisions. It’s a long pre-season and a lot of players go on holiday at this time so we won’t be getting frustrated or worried, we are more excited than anything to get the players we want.

“The manager and the chairman’s enthusiasm for the project is fantastic and I would find it hard to believe that a player would want to go to another club for a little extra money. I certainly wouldn’t.”

There is an extremely busy summer ahead for the 34-year-old scout, but he insists he has thoroughly enjoyed his time with the club so far.

“I’ve loved it. It was obviously a disappointing way to end the season but the club is so close knit and everyone is in it together. We win together and we lose together and I think that’s a big thing.

“I like how organised the club is and how thorough everyone is. I spoke to the manager everyday throughout the season just to catch up on where we are up to and that’s become three or four times a day now.

“There is constant communication but I think that is a key factor. It helps everyone move forward and it’s been a breath of fresh air for me.”