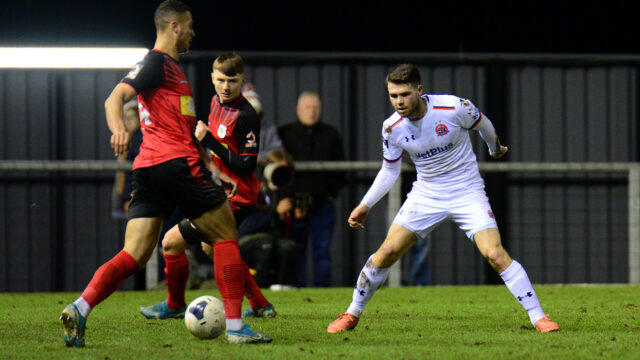 Burke: “I am young but I see myself as a leader.”

The 22-year-old decided to remain with the Coasters and has been explaining the reasoning behind his decision to afcfylde.co.uk.

He said: “It has been ongoing for a few weeks, the club offered me a deal, so I wanted to make sure my head was right and totally focused on AFC Fylde. We all want to work towards the same goal, that’s promotion, so I wanted to be here and remain a part of this club.

“One of the main reasons I wanted to be here was the manager. Since he arrived I have loved playing for him, loved training and loved working with him. I have played nearly every minute in every game that he’s been here and I am enjoying being part of what he’s building. Hopefully we can build on that this year and get the promotion we all want.”

Burke is spurred on by people doubting him and his teammates. The quest to be in the Football League by 2022 has taken a hit with relegation last season, but Burke is refusing to give up on that target whilst it is still mathematically possible.

“If we can do what people are all saying we can’t do, and that’s go for back-to-back promotions, then I would like to be here for that bit of history.

“No matter how we do it, our aim now is back-to-back promotions and you have to have that ambition, that fight and drive to succeed.”

Now the longest serving player in the squad, albeit at a young age, Burke feels he can offer leadership qualities to the group, showing he can play his part off the pitch as well as on it.

“I am young but I see myself as a leader type, I am vocal around the group and I like to think people would listen to what I want to say. I made my debut at Wigan when I was 18 so I’ve had four or five years now in mens football, and technically the longest serving at the football club now!”

On last season’s disappointment, he full-back feels that the group will remember the feeling of being relegated using the points per game method, but they need to move on and start a fresh this season.

“I think we’ve got to forget it,” he explained. “But, we also have to remember the hurt we’re feeling. We’ll use these feelings to make sure it doesn’t happen again first and foremost, but we do need to start a fresh now and move on. It was one of those off-seasons where things weren’t happening for us, the mistakes go against you and that bit of luck doesn’t go your way. That’s just the way it is when you’re down there.”

With changes on the coaching staff this summer in the form of Nick Chadwick arriving as Assistant Manager and Andy Taylor stepping up the staff as Performance Analyst, Burke feels the group can become a close one.

On Chadwick, he said: “I had a little bit of time with him at Wigan. He came in to be the under 18’s coach when I stepped up to join the under 21’s. We were based in different places but then we would also have days when we worked together, which were great. We had a pre-season together and did some other bits here and there, but away from football he’s helped me out a lot as well.

“I had a bit of a tough time a while ago so I popped into the Wigan training ground for a chat and he gave me good advice, was there for me and he helped me to try and clear my head. I’m really grateful for that, I’m sure we will be close this season and that’s what we need, all the staff and players to be close to make a tight group.”

“Tayls is also a great lad,” Burke continued. “He was good to have in the dressing room so it might be a bit weird for him moving from there to the office! He’s going to be someone that you can go and talk to if you want to, you can definitely always go and chat with Jim but if you don’t want to, then Tayls will be there for us as well. He’s got great knowledge of the game and you can run anything by him.”

During the extensive lockdown period, Burke was not one to remain indoors doing nothing. He found his own work and also did his best to keep up a fitness regime.

“One of my family friends is a bricklayer, so I did some labouring for him. It was a bit of an experience getting my hands dirty, I also got cramp in some places I never thought you could get it. I tried to keep fit after having a bit of a rest period, it was hard to get motivated to get running when you don’t know when you’re coming back. I went on plenty of bike rides and I’ve done a few little sessions with the ball and some running with one or two others.

“I’m definitely looking forward to getting back in now and getting some normality.”