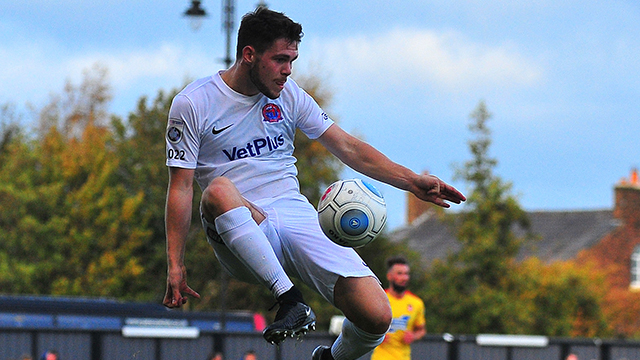 Burke has been a regular for the Coasters this season since making a loan switch from League One side Wigan Athletic and admits he wasn’t surprised to see the two clubs drawn alongside each other.

Fylde will go head-to-head with the Latics at Mill Farm in the second round of the FA Cup over the first weekend of December.

Burke said: “I was watching the draw and I just knew that when Fylde came out that Wigan would be next. I keen to find out if I could play but it turns out I can’t so that’s a shame.

“Wigan are a very strong, attacking side. They have been a real goal threat this season but hopefully we can keep them out. They are strong all over the pitch so it won’t be easy.

“Personally think they will put a strong team out because they will want to get into the third round too. The FA Cup is an important competition for the club after winning it recently so I can’t see a reason why they wouldn’t want to do well again.

“I was only in the U14s at the time but there was a good atmosphere around the club with Roberto Martinez in charge.

“It has been a disappointing few years since but they are back on the up.

“However, we are a strong team and we are definitely on the up too. The performances recently have improved and we are on a good winning streak so if we can keep that going then I think we have a real chance. I’m just disappointed that I can’t be involved on the day.

Burke, who featured sporadically for the Wigan first team prior to his loan move, admits the move to Mill Farm has worked wonders for his confidence: “The lads have been excellent with me and really made me feel at home. My time here has already really helped build up my confidence.

“At the start of the season I was low on confidence on the pitch, but since coming here I have managed to get back to playing how I know I can.

“I had got to the point where even when I was getting a chance, I didn’t want it. Not getting a run of games and coming in and out of the team was difficult.

“But having a sustained run in the team has really helped restore my self confidence.

“I like playing in a back three and in wing back as well as a flat back four. We have been trying out a few different formations recently and I’m feeling comfortable in any at the moment.”