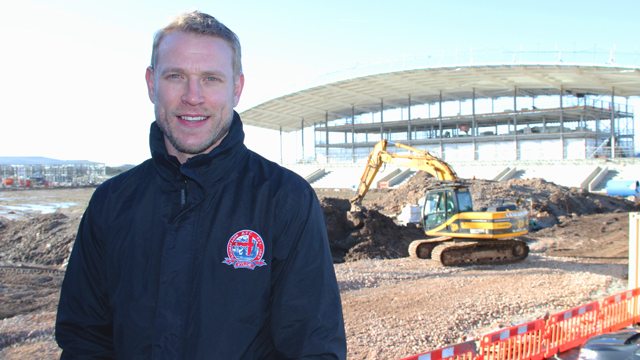 Building for the future!

Hay will oversee the introduction of a complete scouting network at the club, from watching games and producing match reports on opposition teams to highlighting potential targets for recruitment into the first team.

The 34-year-old began his scouting career with Chester before moving into a full time role with Tranmere Rovers. On leaving Tranmere, he worked for Eastleigh in the National League and began this season as Chief Scout at fellow National League North club Stockport County.

Now Hay is reunited with an old friend here at Fylde and he can’t wait to get started.

“I was player manager at Cammell Laird in the Unibond Premier before I hung up my boots,” said Hay. “I left there in 2010 and spoke to Chester about doing some scouting until the end of the season. I took it up full time there and stayed with them as they went up through the leagues.

“I learnt a lot about the job whilst at Chester and what it was all about. I did a lot of research and visited several full time clubs to get ideas off people who had been doing the job for a long time.

“To be honest I didn’t really know much about the job when I first got involved. I looked at all aspects of the game once I finished playing and the scouting side really appealed to me. There’s a lot more goes into it than people think.

“As I got into it I found out that I really enjoyed it and got a big kick from discovering players, bringing them in and watching them develop. It’s very interesting to look into the game in a lot more depth.

“I’ve kept in contact with Chall (Dave Challinor) over the years and had spoken to him a few times whilst he was at Colwyn Bay about players and I would help him out with reports on teams I had watched whenever I could.

“Chall left Tranmere just as I had broken into the first team and we played against each other a few times after that.

“We both retired from playing at a similar time and took similar paths and we helped each other out. We spoke a few times this year about players and it has just developed from there. I decided the time was up at Stockport everything fell in to place here at Fylde.

Born in Birkenhead, Hay admits he jumped at the chance to join a progressive club and believes the only way is up for the Coasters.

“We are building from the ground up here and the plan is to have scouts all over the country,” added Hay. “The club is moving forwards and this is one aspect that they were looking to get started. It’s important to bring in players that can improve the first team and potentially sell on to bigger clubs.

“It’s key to get our name out there and make it as attractive as possible to attract players. We also want to attract young players and make it an exciting club to play for.

“What excites me is almost starting from scratch and being able to put my own mark on the job. I was in a similar situation at Tranmere, but they weren’t ready to move forwards as a club like we are here.

“Most of the jobs I have had recently have involved looking at the short term, but it was apparent when I met the Chairman here that this is for the future and everyone is on the same page. It isn’t just a quick fix, we want to build something that can blossom and that’s what excited me more than anything.

“The first goal is to get promotion and I don’t think we are a million miles from that. The National League is a big division and a very difficult one to get out of, but the foundations this club have laid over the past few years are there to see and we are a club that is going places.

“The fans here feel like a big part of the club and that’s really important for the local area as we look to grow. When I was at Rushden and Diamonds, they were quite a small club and Max Griggs came in and threw a lot of money in and at times they got a bit ahead of themselves too quickly and they struggled to match expectations.

“It needs to be a slow process and this has been on the back burner for a while now so we are going into this with our eyes open. We have our feet on the ground and it’s clear that the club isn’t just trying to buy their way into the Football League, they are trying to build it properly.”

The difficult weather conditions have affected much of the Coasters’ season so far and Hay confessed that it can be equally disruptive in his role.

“I went to Gateshead the week before we played them to have a look, but the day we actually played Gateshead was frustrating because all the games I had planned to go to were called off. I managed to get to an Under-21 game on Sunday and it can be frustrating with the weather, but that’s just part and parcel of it.

“My role is only part time at the moment and it can involve quite a lot of traveling but I’m used to that side of it. I don’t mind driving, I just put Classic FM which sounds very boring but I like to listen to a bit of conversation when I’m in the car.

“It’s a busy job and I’m on the phone a lot speaking to players and agents to find out as much information as I can. If the job is going to be done properly then it needs to be a full time position in the future and I think that’s what everyone wants.

“We are all happy and excited with how thing are going and hopefully we can get back to winning ways as quickly as possible.”