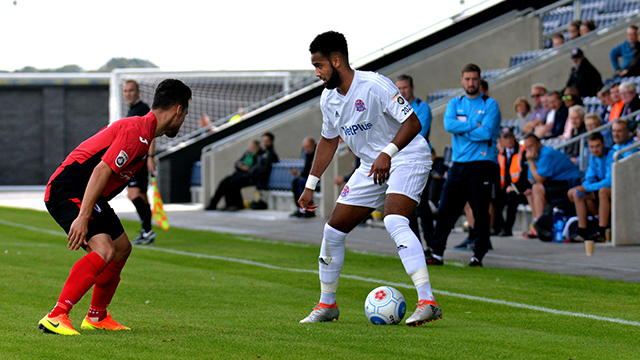 AFC Fylde star Brendon Daniels is delighted to back in the first team fold after recovering from injury.

The winger, signed from league rivals Harrogate Town in the summer, has missed the last two months after suffering injury in the 5-3 victory over Alfreton Town back in August.

However, Daniels made a cameo appearance in the 2-1 victory over his former club at the weekend and completed 90 minutes for the Development Squad on Tuesday and admits he is now raring to go.

Daniels said: “I’m delighted to be back playing again. When you are injured it is mentally draining, but the medical team have been top draw and they have got me back quicker than anticipated.

“It was good to get 90 minutes under my belt. I needed to get some game time to get rid of the rustiness and now I am starting to feel sharp again.

“I thought I did well, created a few goals and won a penalty so I was pleased with my performance considering it was my first full game for a couple of months.

“It’s difficult to come to a new club and get injured so soon because I still need to prove what I can do, but now that I’m back fit hopefully I can do that.

“I’m confident that I can get back in the side, I just need to keep training hard and when I get my chance I need to produce the kind of form that I know I am capable of.

“It’s been frustrating sat on the sidelines, but watching the team win has made that a little easier and now I can’t wait to join in again.”