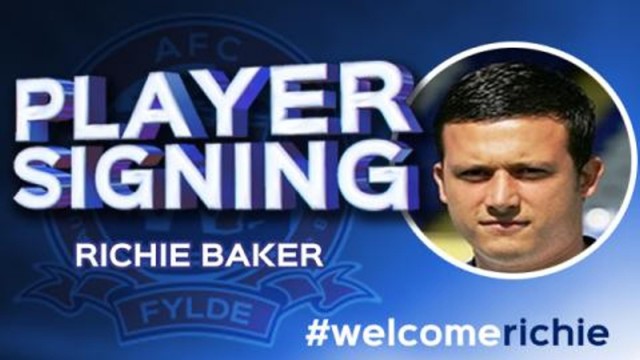 Following expiry of the seven day’s notice of approach, the 27 year-old has put pen to paper on a deal to switch to Kellamergh Park.

Baker is a player who is well known to Dave Challinor and Colin Woodthorpe having spent time with them at Bury FC earlier in his career.  He also won’t be a total stranger to Coasters fans having featured in the 1-0 Pre Season victory at home to Bolton Wanderers.

Richie spent his junior years at Manchester United’s Academy before signing for Preston North End to complete his scholarship.  He then signed professional at Bury FC, spending four seasons there and scoring seven goals in just over one hundred games.  A brief move to Oxford City was followed by a move back up North to Barrow AFC.  Twenty four goals in ninety games saw him establish himself as a goal scoring midfielder in a side that struggled and were eventually relegated.

This season saw him sign for Stockport County where he has contributed six goals in 27 appearances and played in both 0-0 draws against The Coasters earlier this season for the Edgeley Park side.

Manager Dave Challinor said: “’I’m delighted to get Richie in with at this important time of the season.  It’s no secret that we wanted to get him in during the summer and we offered him a deal.  Unfortunately he was offered a deal at Stockport County that was very good and we couldn’t get anywhere near what they were offering.

“I know Richie well, he’s a great lad, a very good footballer with good experience and very importantly, he knows us and knows what we’re about and our expectations.  We’ve kept in touch throughout the season and with him only being non-contract at Stockport, it was a bit of a no brainer to try and get him in.

“I think over the season he’s seen what we’ve been able to achieve, how we try and play and where we are looking to go and he wants to be a part of that.  It shows that in the fact that he could have seen the season out at Stockport and earned more money than we’ve been able to offer him.

“I’m hoping he’ll come in though at this important time and add a new face, a new voice and some added quality.  We see him as part of the team, not only this season but beyond that as well.  I’m sure everyone will make him feel welcome and there’s no bigger game to get involved in than a local derby against Chorley.”

Richie is expected to make his debut for The Coasters in tomorrow’s clash with Chorley.