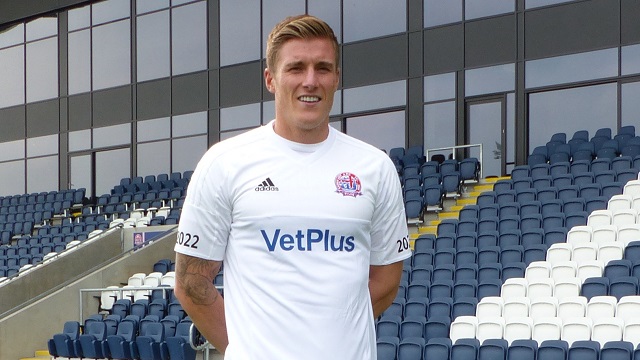 AFC Fylde are delighted to announce the signing of Alfreton Town ace Dan Bradley for a club record fee.

The Coasters beat off competition from Lincoln City, Kidderminster Harriers and Halifax Town for the 25-year-old forward, who joins the club on a three-year deal for a five figure sum.

Bradley has been one of the league’s outstanding players over the last few years and many clubs have been tracking him so Fylde manager Dave Challinor was understandably delighted to secure a deal.

Challinor said: “He certainly gives us another strong attacking option going forward. He is one of the best players in our league and has ambitions of playing higher.

“I’m sure he will flourish with us and he undoubtedly improves our squad.”

Coasters Chairman David Haythornthwaite was equally pleased to get a deal done: “As soon as we knew he could be available, we were in contact with Alfreton and their Chairman Wayne Bradley (no relation). He has been really great throughout in what is always a difficult situation, especially when you are losing your best player.

“We knew they had received bids from other clubs but were determined to get him. Players of Dan’s quality don’t come along too often so you try not to let them get away and especially not to one of your league rivals.

“It’s the most we have ever paid for a player by a long way but I am sure it will be a good investment and that Dan will give us that little bit extra to help us get over the line this season.

“More importantly it shows our commitment to helping our manager. With another signing expected to be confirmed in the next few days, we are not too far off where we want to be.”