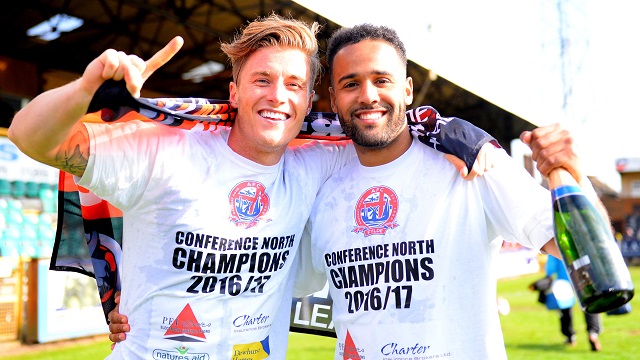 AFC Fylde record signing Dan Bradley was delighted to secure the National League North title after a rollercoaster end to the season.

Fylde forked out a record five-figure sum in September to bring in Bradley from Alfreton and the midfield man has repaid that faith his 11 goals helping towards league glory.

Whilst the Coasters endured a nervy finale to the season, Dave Challinor’s side won the title at a canter, finishing six points clear of second-placed Kidderminster Harriers.

Following a 4-2 final day victory over Worcester City, Bradley was over the moon to have won promotion and admitted that his side would have settled for nothing less this season.

Bradley said: “It’s brilliant to finally get hold of that trophy. It’s been a long season and there have been some ups and downs. Towards the back end of the season it was tough but we dug in and we’ve seen it through in the end.

“As soon as I joined the club, obviously the goal was to get promoted. We didn’t beat around the bush – everyone knew that’s what we wanted to do.

Despite clinching the championship a week earlier, Bradley was adamant that the Coasters were keen to finish the season on a high with a result in front of their own fans at Mill Farm. Fylde fell behind inside two minutes against the relegated visitors but ran out comfortable winners with goals from Matt Blinkhorn, Danny Rowe, Andy Bond and Richie Baker.

Bradley added: “Going into the game, it would have been quite easy to go through the motions but it’s testament to the team that we went out there, put on a performance and got a result to boot.”

Fylde will now enjoy a well-earned rest over the next six weeks, but Bradley admits he already has one eye on next season in the National League.

“I’ve not had chance to think about the summer yet, I’ll probably just put my feet up for a bit, relax and then get ready to come back raring to go for the tough challenge ahead next season.

“We have some very good players and a great set-up here. Everything is set up for us to be successful in the next league up too.”