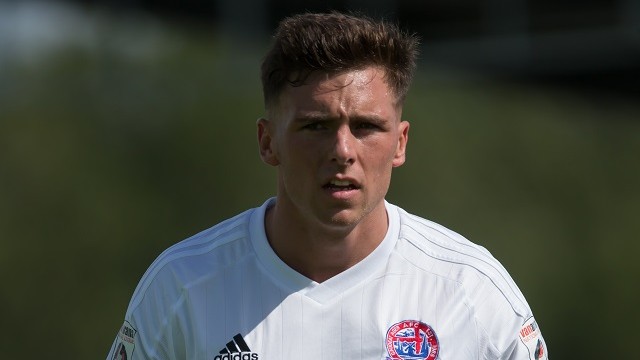 Brad delighted to be back

AFC Fylde captain Brad Barnes is hoping the injury problems that have hampered him this campaign are now firmly in the past.

The midfielder missed a spell earlier in the season with a niggling neck injury and has been out of the team for the last couple of months through injury and personal reasons.

However, after a late substitute appearance against Gainsborough in the last league outing, Barnes started in the 4-0 FA Trophy victory over Skelmersdale United at the AJ Bell Stadium in Salford last week.

Barnes was also part of the squad that travelled to Eastbourne Borough at the weekend and is now keen to win back his place in Dave Challinor’s side.

“I was very pleased to be back in the starting line-up and it made it all the sweeter that it came in a victory,” said Barnes. “It was a nice stadium to make my return in and above all it’s just great to be back playing.

“I’ve missed everything about it. I’ve missed the banter in the changing room and being out there on the pitch helping the team.

“I’m the sort of person that just loves playing football and it’s a relief to be back amongst it after quite a bit of time out for one reason or another.

“I made a cameo appearance the match before at Gainsborough – although I think I only had one touch! Now I just want to keep improving my fitness and get back out there on a regular basis.

“I’ve been easing myself back in and I’m pleased with how I’ve done so far.

“Fair play to the lads recently, they are doing very well and I don’t expect to just walk back into the team. Other lads have got the shirt at the moment so I will have to just keep working my socks off and win back my place.”

The Coasters made it four wins on the bounce since the turn of the year with the 4-1 victory at Eastbourne and Barnes admits confidence within the squad is sky high.

“Confidence in the side is high at the moment, but I think that has always been the case. We know we are a good team and we also know what we are capable of. We had a couple of dodgy results at the end of the year, but we have started this year really well.

“I don’t tend to get as far down as Eastbourne very often – in fact I think I’ve only ever seen it on a map! But sometimes you have to go to these places in football and thankfully we came away with a good result and we are still in the competition.

“We want to carry that on, continue to not concede many goals and keep winning games because that’s what it’s all about.”