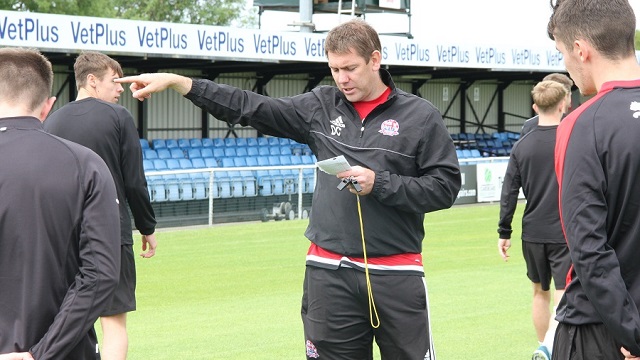 AFC Fylde boss Dave Challinor believes his side have been handed a difficult start to the new National League North season.

The Coasters will travel to AFC Telford United on the opening day of the season and Challinor is expecting a tough test.

“We knew we were going to be away from home first as we asked the league for that prior to the fixtures being released.

“It will be a tough start, but that would have been the case whoever we had got. One thing you know for certain is that the pitch will be in great nick and there will be a big crowd over there.

“We are already looking forward to it and hopefully we can go there and get off to a positive start to the season.

“We won there last year but this season will be hugely different to the last meeting. It was a battle there last year and they were on a good run so we can take some encouragement from that but there has been a big change in personnel at both clubs since then.”

The Coasters are scheduled to play Salford City in their first home game of the season on Tuesday 9th August but have requested to rearrange the fixture to a new date and now look likely to host Brackley Town in the opening match at Mill Farm.

“Brackley have signed three lads from champions Solihull and when you consider that Solihull can’t match what Brackley are paying then that says a lot about where they are.

“Only two years ago they were a Conference side with a big budget. They have a manager in there with plenty of experience and they will be looking to compete this season I’m sure.

“They too will a different proposition to last season and I expect it to be a really difficult match.

“It’s important that we make a good start to the season. Over the last two years we could have probably predicted how many wins or how many points we would need to reach our target but I think this season will be completely different. It’s going to be the toughest this league has ever been.”