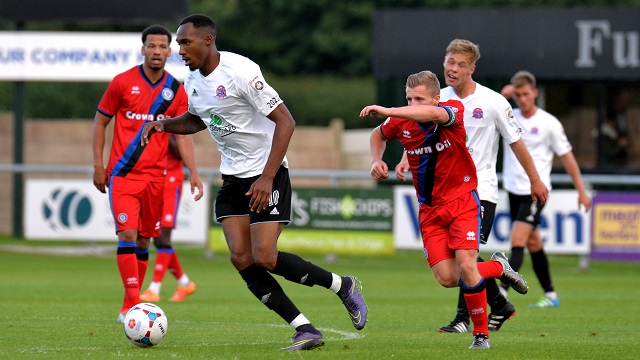 AFC Fylde boss Dave Challinor believes his side can take a lot away from last night’s pre-season friendly against Rochdale.

The Coasters slipped to a narrow 2-1 defeat but more than matched their League One opponents for much of the game and Challinor was pleased with the performance.

“It was a much bigger and tougher test for us than Friday night against Stranraer and I felt like we got a lot more out of the game in terms of sharpness. We were pressed by a good team who move the ball around well.

“There were lots of positives for me and it was another good run out in terms of fitness. A few of the lads had to play 90 minutes, which isn’t ideal, but we had a couple of little niggling injuries last minute before the match and we didn’t want to risk anyone.

“We would have liked to change everybody at some point but thankfully they have all come through unscathed. We will have a look this week at switching it around for the weekend to spread out how many minutes people play.

“We created a lot of opportunities which is really pleasing and although we didn’t stick them away, that will come a bit further down the line I’m sure. If we save them for when the season starts then I’ll take that!

“Matty Hughes especially could have had two or three but he is getting himself into good positions. We swapped him over to the left hand side and he looked a real threat. I’m sure once he gets one then he will kick on.

“Inevitably you are going to miss chances at this stage because people are rusty but we competed well and on another day could have scored a couple more.”