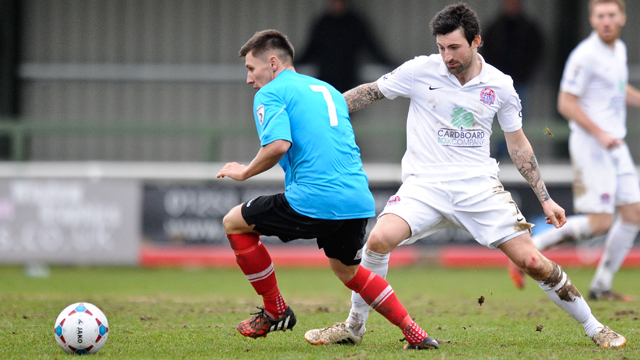 Look out for a familiar face in the Coasters dug out this weekend … fans’ favourite Joe Booth has returned to the club!

Boothy has taken up an invitation from manager Dave Challinor to get involved with the backroom staff with the hope of his association continuing once the club moves to Mill Farm.

The 29-year-old midfielder moved on in the summer after eight seasons with the club, making the short trip Bamber Bridge in search of regular first team football.

Unfortunately, his season was cut short by a serious knee injury that looks likely to keep him out for an extended period.

Challinor was over the moon to welcome the club’s record appearance maker back home: “I’m delighted Boothy has accepted our invitation to come back and get involved.

“It was something I mentioned to the Chairman and Colin (Woodthorpe) a few weeks ago and it was met with unanimous approval.

“Boothy is a great lad with an infectious character, he knows the club inside out and most importantly he knows how Colin and myself work.

“We feel he will be a brilliant asset back in our dressing room. We always wanted to bring Joe back in some capacity ahead of the move to Mill Farm.

“As with many ex-players, we parted on really good terms and we totally understood his reasons for needing a change. Unfortunately, his season has been cut short by injury and after talking to him a couple of weeks ago, we kept in touch to try and help him with treatment and rehab.

“He had a scan and the damage was worse than he’d feared, so I asked him if he would like to get back amongst the lads here, most of which he knows very well, straight away and he jumped at the chance.

“I must thank Neil Crowe at Bamber Bridge for his understanding of the situation having spoken to him in the week. In terms of an official role for Boothy, I suppose ‘Entertainments Co-ordinator’ may be quite appropriate! In all seriousness, he’ll be another set of eyes and ears in our dressing room and another member of staff that the lads can bounce of and take advice from.

“I know he’ll be welcomed back with open arms and we are all very excited about it.”