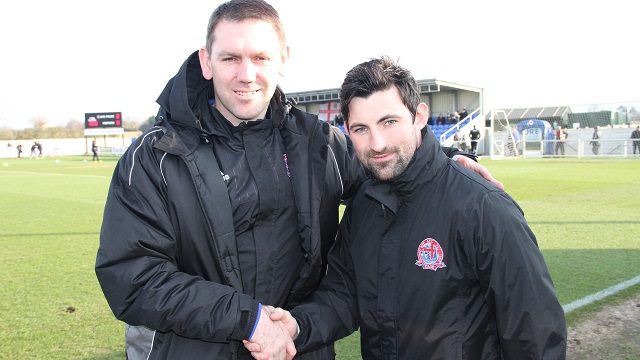 Fans favourite Joe Booth insists he is delighted to be back at AFC Fylde just six months after leaving the club.

The former Coasters midfielder has taken up an invitation from manager Dave Challinor to get involved with backroom staff with the hope of his association continuing once the club moves to Mill Farm.

Booth moved on to Bamber Bridge in the summer after eight seasons with the club in search of regular first team football, but his campaign was cut short by a serious knee injury and now the 29-year-old can’t wait to get back involved.

“It really was an opportunity that I couldn’t turn down,” said Booth. “It couldn’t have come at a better time because of the injury I had picked up and I’m delighted to be back.

“Fylde are my team and they always have been so for them to ask me to come back was a no-brainer. There are still a lot of familiar faces here and they are all my friends so that makes it easier to settle in.

“Chall (Dave Challinor) wants me as part of the management team with himself and Colin (Woodthorpe) as a bit of a go-between from the players to the staff. I’m here to give my opinions and thoughts and hopefully give the place a general lift.

“News spread that I had got injured as I still speak to a lot of the lads here and Chall must have got wind of it and he got in touch. I think it’s something he had planned for the future anyway but this has brought things forward.

“It is an especially exciting time to be coming back with the team on the up and a new stadium on the horizon. It was always in my plans to come back and watch Fylde when I eventually finished playing so to be involved too is a massive bonus for me.

“At clubs like Bamber Bridge the facilities are decent but sometimes you don’t notice how good a club is until you leave and I’ve definitely realised that over the last six months. The hierarchy, the players and the new stadium are so good here. Hopefully now we can start attracting a few more fans and fingers crossed it’s onwards and upwards.

Booth admits he is looking forward to experiencing a different side to the game but hasn’t ruled out returning to action on the pitch.

“I always wanted to stay in football because it’s all I know. I’ve spent every Saturday of my life playing football but I didn’t know which side of the game I was going to get into.

“You never know, if I can get back fit again I might even make the bench! Everyone who knows me knows I will play on until I physically can’t play anymore. I’m hoping to be back in training in about a month so I’ll be joining in with that, but any further than that, let’s just wait and see.

“I originally left because I wanted to play every week. I was in and out of the team here last season and the travelling was becoming difficult when I wasn’t playing. I was at a stage in my career when I needed to be playing regular football and I felt the time was right to move on.

“I wanted to enjoy the rest of my career playing football rather than sat on the bench. But you never know what the future holds because I’ve only been away six months and I’m already back!

“I’ve had some great times here over the years. I’ve enjoyed three promotions and I captained the team to the Lancashire Cup title. Making my 300th appearance was a nice moment for me too.

“It’s nice to be popular with the fans and it will be great to see them again too and now I can’t wait to get started.”