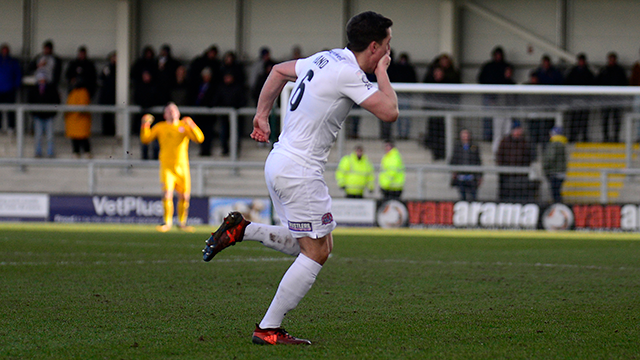 The Coasters led 3-1 with one minute of normal time to play, however two unstoppable strikes late in the day put a dent in Fylde’s promotion hopes.

Bond himself had put the hosts in the driving seat with two quick-fire goals after half-time to cancel out Jordan Tunnicliffe’s own goal but admits the Coasters were the masters of their own downfall.

The versatile midfielder, who celebrated his 32nd birthday on Friday, said: “The two late goals that they scored were down to sloppy play from us as much as anything.

“We were 3-1 up and we were very comfortable. We took our foot off the gas, thinking the game was over and they punished us with two very good strikes.

“We started the game slowly and conceded a silly goal in the first place but we came in at half-time and the gaffer gave us exactly what we needed – a good kick up the backside.

“We began the second half unbelievably well but we shot ourselves in the foot and conceded two very preventable goals at the end when the game was as good as won.”

Bond doubled his goal tally for the season with a rare brace but the birthday boy wasn’t in the mood for celebrating.

“I was in the right place at the right time. The gaffer made a few changes at the break and the first one dropped kindly to me and the second I’ve just hit it and thankfully it’s flown in.

“However, it’s irrelevant who scores the goals now, it’s purely about getting results at this stage of the season and we slipped up.”

Fylde look to get their play-off push back on track this weekend at Dagenham & Redbridge and Bond insists three points is a must.

“The lads are gutted because it feels like we’ve lost. But we have to settle for the point now and we go again next weekend against Dagenham. We have to win, it’s as simple as that.”