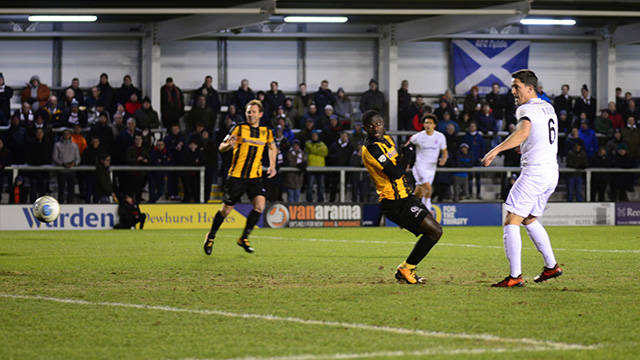 Tuesday’s 3-0 victory over Maidstone United at Mill Farm saw the Coasters leap into the highest league position in their history.

Six wins from their last seven outings has seen Dave Challinor’s side rise from the lower reaches of the table to genuine promotion challengers as they commandeered a play-off place.

Bond has been integral in the Coasters upturn in form, netting his first goal of the season in the astonishing 6-0 victory over Macclesfield Town before following up with the opener in the midweek win over Maidstone.

The former Football League man is eager for a return to the promised land and believes his team are on the right track.

Bond said: “Tuesday was another good win for us, which was important after the massive victory over Macclesfield at the weekend.

“We managed to build on that so that’s very pleasing and keeps our run going.

“We are heading into every game at the moment knowing that we can win, that’s how confident we are.

“Nobody will fancy playing us at the moment, especially at Mill Farm. Can we achieve success this season … absolutely. We haven’t ruled anything out yet.

“We can’t take anything for granted and we know that each game will be different but we are still approaching each game full of confidence.

“We went through how Maidstone play in our training, took that into the game and stifled them. We got the early goal and built from there and we were comfortable.

“I got a few last season but I’m a little disappointed that I haven’t scored more this year to be honest. I have a couple now but I’m not bothered if I score or not as long as we win and keep climbing that table.

“We have been keeping clean sheets and scoring goals and we will approach the game at Woking on Saturday as we do any other. Nothing has changed and we want to win, it’s a simple as that.”