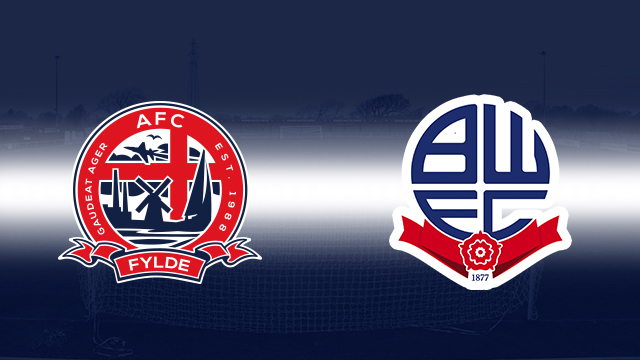 The Coasters won their opening two pre-season fixtures 1-0 with victories against League One sides Fleetwood Town and Rochdale before travelling to Wales to face Airbus UK, where they were defeated 3-0 despite playing well. Bamber Bridge were next for Fylde and The Coasters managed to overcome their local neighbours and win 3-2 thanks to three first half strikes from Danny Rowe, Danny Lloyd and Richie Baker.

More recently, The Coasters travelled to Cheshire to face Nantwich Town last Saturday and came away with a 1-1 draw courtesy of a Dion Charles equalizer after Matty Kosylo gave The Dabbers the lead. Richie Baker was instrumental in midfield, while Matt Blinkhorn got a good run out up front. That result means that Fylde have won three, drawn one and lost one of their pre-season schedule so far and up next is Championship side Bolton Wanderers as The Coasters move into the final part of their pre-season programme.

Matty Hughes had to come off with a toe injury in the Nantwich game and may not be fit for Wednesday evening’s match against Bolton but other than that, boss Dave Challinor should have a full team to choose from. Josh Langley and club captain Brad Barnes are a couple of games behind in terms of playing time and should get a decent run out, while there could be another chance for a couple of trialists to make a name for themselves. Barnes was man of the match in this fixture last pre-season and will be hoping for a similar performance once again.

Whilst Fylde have played five pre-season games so far, Bolton’s Development Squad have played already played seven, including three wins, three draws and most recently a 3-0 defeat away at The Coasters National North rivals Tamworth. Wins came against other National North opponents for the Coasters this season in the shape of Chorley and Colwyn Bay, while a draw away at Stockport was also credible.

Bolton came to Kellamergh Park last pre-season and where handed a 1-0 defeat by The Coasters courtesy of a second half Danny Lloyd goal and remarkably, the same fixture last pre-season was on the 29th July – the same day as the game will be played this pre-season. Zach Clough, Tom Walker and Hayden White all played for Bolton on that day and have since made regular appearances in their first team. Players to look out for during Wednesday’s game from Iaian Brunskill’s side include Christopher Cvetko, Jamie Thomas, Jon Cebrio, Jordan Lussey, Kaiyne Wooley, captain Nail Maher and Andy Kellet, who was on loan at Manchester United last season.

11 year-old Daniel Fryer will be manager for the night for AFC Fylde after being handed the role from the winner of the club’s end of season auction.

Former Blackpool, Manchester City and England winger Trevor Sinclair will be at the game, chatting to guests in the Sponsor’s Suite 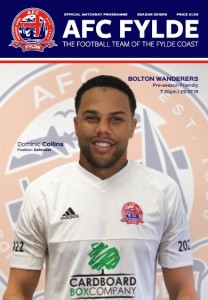 The match programme will be on sale inside the ground and features an exclusive interview with Chief Executive David Chell.

The 16 page programme is just £1.50 and is on sale from our sellers inside the ground.

AFC Fylde will wear their new Adidas kit for the first time against Bolton Wanderers. This is due to the club photography team beginning the process of taking shots for the 2015-16 programme. Those who have ordered a replica shirt will be able to come and collect them from the club shop inside the ground and there will be additional stock on sale. Please note we are awaiting delivery of small and medium home shirts.

Don’t forget to come to the ground from 6pm and have a drink in the bar. We have a wide range of products including John Smith’s, Fosters and Kronenburg in Fuller’s Bar where you can watch live sport on the big screen. Food options are available from the snack kiosk selling locally produced Gigli’s Pies and Snape’s burgers.

Limited parking is free on the club car park but fans are advised to get there early to guarantee a space.

Admission is £8 Adults, £5 Concessions and free for U16’s with a paying adult.

Video previews and post-match interviews are available on You Tube and audio interviews can be heard on our latest addition Audio Boom.

Images will be also be added to our Instagram page so there is no excuse to miss out on the action, wherever you or we are!