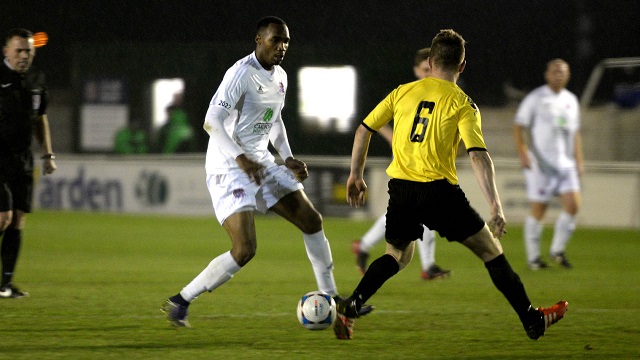 Fylde’s ultimate goal is reaching the promised land of the Football League and one man who has already experienced such a level of the game is eager to help get the Coasters there.

Towering midfielder Bohan Dixon, even at the age of 26, can be seen as a footballing journeyman. He has had experience of league football with Accrington Stanley before dropping into non-league, playing for Salford City, AFC Marine and Lincoln City before joining the Coasters.

Dixon has become a firm fans favourite at Fylde with a string of composed, dominant performances from central midfield as the Coasters look to gain promotion to the Vanarama National League via the playoffs.

The powerful midfielder spoke of his admiration for Fylde’s ambition and said that he was well aware of the Coasters many years before joining.

“The first time I heard about AFC Fylde was when I was playing at Accrington. We played Fylde and beat them. One of my mates also used to play for Fylde, Tom Eckersley at the back.

“Obviously, I always used to check the results and see how the club was getting on. My other mate Danny Rowe then joined as well.

“For the last three years, I’ve been checking out Fylde’s results every week.”

According to Dixon however, Fylde is unlike any other club he has played for, certainly in terms of their displays on the pitch.

As a dominant central midfielder player, Dixon has highlighted Fylde’s style of play as a major factor as to why he decided to join the club. He also hopes to use his experience of winning promotion to push the Coasters on to glory next month.

“The style of play definitely attracted me. I also had words with Rowey and he said how the club will suit my style as well. I like to get the ball down and play with it.

“Accrington kind of played to that style too, with them being in the Football League. Lincoln were much more a long ball team and Stalybridge was very different. I got on with the lads, but at Fylde we get the ball down and play football.

“I was speaking to Dave Challinor and he was keen to add my experience to the squad. I know what it takes to play at a higher level. Even though I’ve not played at much higher levels, even just in League Two, I can notice the difference.“

Dixon’s signing was well received by the Coasters’ fans, who have warmed well to the playmaker. Fylde are set to move into their new stadium, Mill Farm for the start of the 2016/17 season with a capacity of 6,000 fans and Dixon has expressed his excitement at being part of the Coasters squad when the move is made and thanked the fans for their support since his arrival.

“We definitely want to be in the league above and it should help to attract even more fans. Even other fans such as Blackpool fans should come to our ground and cheer us on!

“It’s great to have fans behind you. We know that we have to give them what they come for and what they pay their money for and that’s to get into the league above.

“The new stadium was also something that really attracted me to the club. I’ve seen what it’s going to look like but I haven’t been inside it yet. I can’t wait to get in there.”