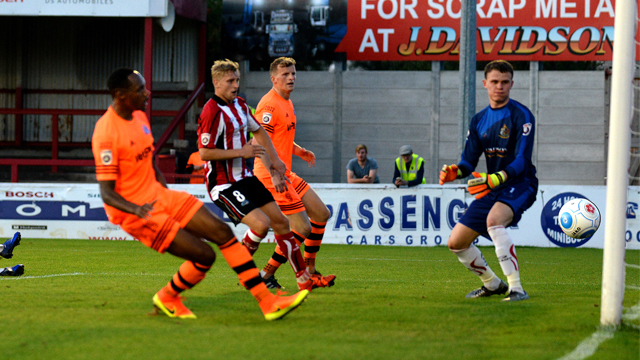 The towering midfielder, affectionately nicknamed ‘Yaya’ by the fans after the Manchester City star, put in a man of the match display as the Coasters moved up to third in the National League North standings, with a game in hand.

Dixon fired home the second goal of the game from 25 yards before arriving at the back post to turn home Brendon Daniels’ cross and Challinor was delighted to see the former Accrington Stanley man pop up in the box.

“We have asked Bo to play in a slightly different role this season,” said Challinor. “Because of his size and his body language he can look a little laboured at times, but make no mistake, he is as fit as anyone at the club. He’s powerful with electric pace and we have been encouraging him to get into the box a lot more this season.

“So for him to get his second goal from inside the six yard box was really pleasing for me. We need him to be getting into that kind of position and he will score a lot more goals for us if he does.

“We will work on him fitness-wise so he able to make those runs on a regular basis.

“The big issue with Bo is that he has decent feet and that’s probably one of the worst things he could have! Ultimately his strengths are that he’s big, strong and quick and he proved on Tuesday that he can finish too.

“He got a couple on Tuesday and he could have had a couple more to be fair. He will be an important player for us this season.

Whilst Dixon was the standout play at the J. Davidson Stadium earlier in the week, he wasn’t alone in turning in an outstanding display and Challinor hopes to replicate that form this weekend when the Coasters travel to Alfreton Town.

“There were stand out performances all over the pitch. We asked for a reaction after Saturday’s draw against Brackley, because I was disappointed with the performance.

“I think we got caught up in the occasion (the opening game at Mill Farm) and we lacked work rate which is very uncharacteristic of us. So we challenged them to put that right and they did that in fantastic fashion. Now we have to back that up tomorrow at Alfreton.

“We have set the bar high now so we need to try and get a good result.”