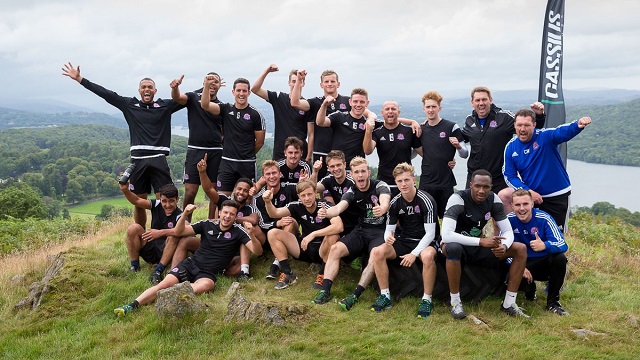 AFC Fylde first team stars were put through their paces earlier in the week as manager Dave Challinor continues to prepare his squad for another gruelling National League North season.

The Coasters took on an exhausting army style training day in the Lake District and Challinor believes the mental strength his troops demonstrated over the course of the day will prove invaluable.

Challinor said: “We travelled to Lake Windermere on Monday morning to take part in a training programme with Cassius Camps. Basically they look at twelve pillars of assessment in terms of self-belief, mental strength and similar aspects and the lads were really put through their paces.

“We started off in the morning with a tough warm up and then they were simply battered for an hour and a half to gain a ranking of where people were at.

“They then set off on a run up a steep incline, carrying a lot of weight on their back. The morning session lasted about three hours and there was just a 30 minute break from some lunch before they were right back at it.

“There were more tough runs in the afternoon before we end up down at the lake for some team building activities, which again were very strenuous.

“It was a really beneficial day for us. There were some very tired bodies but it was hugely enjoyable for everyone.

“As a group and as individuals we learnt a lot about ourselves and a lot about each other. I think it has put us in a really good frame of mind for the start of the season.

“Whether it’s army camps or sand dunes, you get challenged in pre-season but this was really extreme. The lads were asked to empty their tank and they wouldn’t have got through it without each other and that was a big positive for me. It really pulled the group together.

“The physically aspect was tough but the mental challenge was far greater. Every single one of the lads at some point during the day was running on empty. That’s when the mental side kicks in and no one gave up and that’s a massive thing for us ahead of the new campaign.”