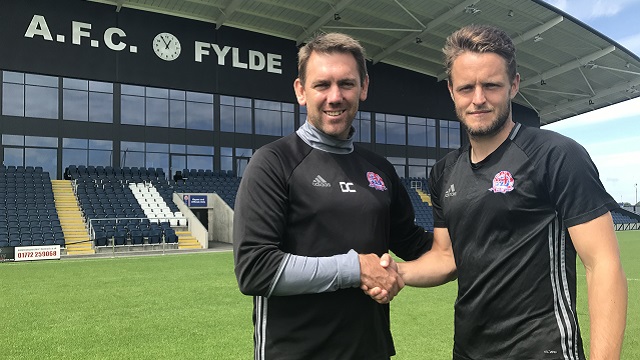 AFC Fylde are pleased to announce that striker Matt Blinkhorn has penned a new one-year deal with the club.

The 32-year-old will remain with the Coasters until the end of the 2017-18 season, whilst also taking up a coaching role with the first team.

The frontman is currently Fylde’s longest serving player after joining the club over four years ago from Hyde. Initially signing on loan, Blinkhorn scored twice in three appearances to earn a permanent contract with the club.

The popular forward has since enjoyed two promotions with the club and could not hide his delight after putting pen to paper on his new contract.

Blinkhorn said: “This will be my fifth season with the club and to get from where we were then to where we are now has been a massive achievement. I wanted to remain a part of that and thankfully we have got something sorted.

“I am the longest serving player here now and I want to extend that further still into the future.

“I had a few other offers but this club is going places and I had the opportunity to combine it with some coaching so to stay here was always my number one choice.

“Hopefully I will get a bit more game time this year but I suppose that depends on if Rowey does as well again!

“There is even more competition for places with Jack Muldoon coming in too but we will see what happens.

“On the coaching side, I will be helping out with the strikers, the warm-up and activation and some of the gym work too so there’s lots I can help with. However, first and foremost, I still want to play.”