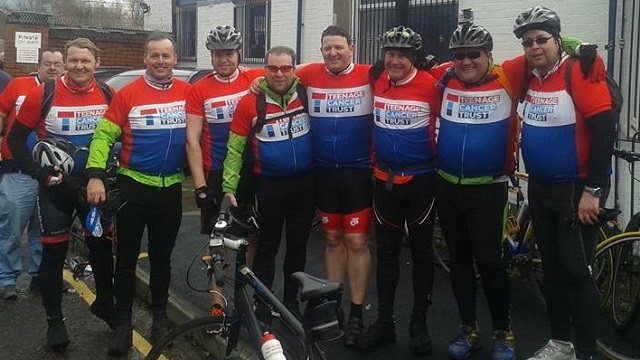 Eight AFC Fylde supporters braved the elements over the Easter weekend as they took on a special charity bike ride.

Several mixed ability cyclists, including stadium announcer Brian Porter, cycled over 50 miles from Kellamergh Park to Stockport’s Edgeley Park ahead of the match on Monday to raise money for Teenage Cancer Trust.

Despite initially hoping to raise around £1,000, the total currently stands at well over quadruple that.

The money will be used to help provide specialist care and facilities that allow those suffering to be teenagers first and cancer patients second.

Around seven young people aged between 13 and 24 are diagnosed with cancer every day in the UK and the Teenage Cancer Trust currently helps around half of those suffering, however the increasing number of donations to the charity can help them reach the other half so that no-one suffers alone.

Brian admitted that whilst the ride was a challenge, it was more than worth it: “We seemed to hit every red light, bike chains came off, wheels fell off and we rode through some shocking weather conditions. But we all knew why we were doing it and that spurred us on.

“We set off at 8am and arrived six hours later to a very warm welcome from the people at Stockport, who helped us raise even more money which was brilliant.

“I am eternally grateful to everyone who has given up their time and money for this fantastic cause.”

Well done to everyone concerned from all at the club.

You can still donate to the cause by clicking here.