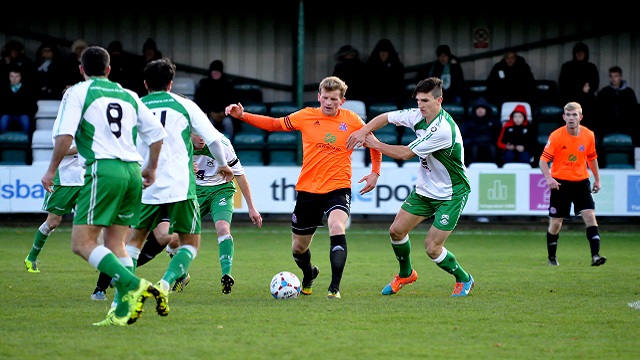 Biggest match for both – Chally

With the grand prize of Conference football on offer for both sides, Challinor is keen to end a gruelling season on a high.

“There’s no doubt it is the biggest match in either club’s history with the opportunity to reach a level that neither has played at before.

“When you have spent the best part of nine months getting to this stage for a one-off game that decides your future then of course you want to win. It’s massive for both sides.

“Regardless of what happens it will be business as usual for us. We would love to get out of this league this time, but if that doesn’t happen, the same focus will be on doing that next year.”

Challinor admits defensive frailties have cost his side dearly in the two league outings against North Ferriby this season and he is keen to avenge that record.

“We went their earlier in the season with a depleted squad and were well beaten in the end but between their first two goals we had some very good chances and we didn’t take them and that came back to bite us.

“There wasn’t much in the return game here at Kellamergh Park. We didn’t deserve to lose that game by any stretch, but we conceded three poor goals from our perspective and it’s difficult to score four goals to win a game. We did score two and had a perfectly good goal ruled out for off-side in the last minute and again we missed too many chances.

“We have to be wary of them this time around and defend better than we have done against them so far this season. We accept that balls will be played forward and we have to work exceptionally hard to stop the ball going into our box. Our inability to do that against them this year has cost us on both occasions so we have to do more to stop that threat.

“We have plans and ideas of how to stop the threat, but you are reliant on the lads communicating and being organised because situations will happen in games that you can’t prepare for.

“On the flip side we have to give them problems of their own and cause them issues with our attacking threat. We have played each other an awful lot over the last few years and we both know what the other is about. There have been some really tight games in the past and I think the final will be similar.”

The manager refused to be drawn into a prediction for the match but does not believe that home advantage will give the hosts the upper hand.

“Of course I hope we win, but predicting a play-off game is virtually impossible.

“Whether you are home or away, it’s all about performance and making sure you do enough to win. Whoever performs better on the day will win, regardless where the game is played.

“We go into the game open-minded that we might concede at some point and we can’t take that too badly. It’s a 90 minute game, potentially 120 minutes, and I’m sure within that time there will be a lot of twists and turns. Ultimately we just have to make sure that when the referee blows that final whistle that we are in front.”