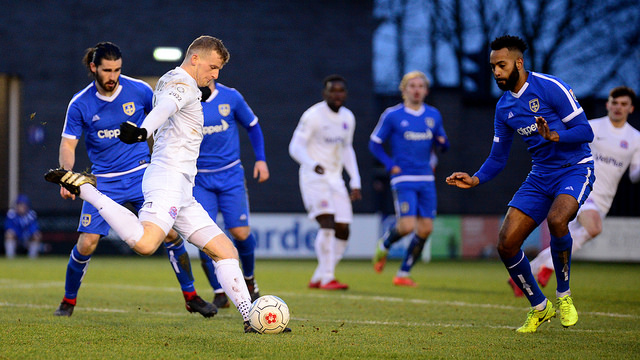 Better late than never for Rowey!

AFC Fylde hotshot Danny Rowe admits he was resigned to frustrating afternoon in front of goal against Guiesley at the weekend – until his last-gasp 25-yard free-kick flew into the top corner!

The frontman crashed home his 15th National League goal of the season as the Coasters continued their unbeaten start to the New Year with a 2-1 victory over struggling Guiseley.

Fylde have picked up 13 points from a possible 15 over the last five league outings and Rowe believes teams are now setting up to halt his free-scoring play-off hopefuls.

Rowe said: “It was getting towards the end of the game and I just thought it wasn’t going to be my day. I had a half-volley go just wide, I’d hit the bar and seen loads of shots blocked.

“We got the free-kick 25 yards out and Sam (Finley) asked me if I was going to hit it. I’d never turn down that kind of opportunity so I hit it keeper’s side and thankfully it’s flown in.

“We were on top in the first half but we came out after the break and looked like we really wanted to win the game. They defended well but we were camped in their half and we had more than enough chances to win.

“Guiseley set up similar to how Chester did a few days previously. Teams come here, particularly teams towards the bottom of the table, and set up to try and get a draw or wait for a mistake and nick something like Chester did. We didn’t let that happen on Saturday.

“It is hard to create chances and score when a team just sits on the edge of their area and defends but we managed to grind out a result.”

“Jonny is a very good player and he has bags of pace but he is only young so he’s got things to learn.

“It’s a new partnership that we’ve not really looked at yet. I think the manager put him up there with me because he can get in behind their centre-halves.

“I’ve got my own goal targets going into every season and I set myself 30 this time around. If I can get to that then great and then hopefully I can go beyond it.”

The Coasters face their third of four back-to-back home games at the weekend with the visit of league leaders Macclesfield Town, however Rowe holds no fear of the pace-setters.

Rowe added: “We don’t fear Macclesfield even though they are top of the league. They like to play so it should be a good game between two in-form teams. We have nothing to lose as far as I’m concerned. We want to push on and get into the play-offs.

“They come here top of the league and they’ll be confident of winning the game. It’s our job to stop them doing that and try to pick up the three points ourselves.”