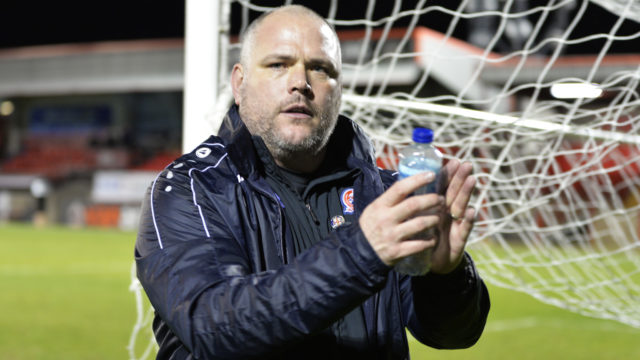 Bentley: “We’re at a stage now where it’s about results and not performances.”

Jim Bentley has previewed the upcoming clash with Aldershot Town this weekend, with the local media.

Following Tuesday night’s late and dramatic win over Dagenham & Redbridge, Bentley stated that the win made it a ‘great dressing room’ at full-time.

He said: “Being away from home and being pegged back, then scoring the last kick of the game and knowing the position we’re currently in, all those things play a part, and it was a really good feeling at the end to get the winner.

“It was one of those moments in football where time is standing still. When the ball looped over it all went quiet for a split second and you’re just willing someone to get on the end of it, and they did. We got the win and it was a great dressing room afterwards, just what we needed.”

Moments like Alex Whitmore’s winner on Tuesday can ‘kickstart a season’ according to Bentley, but was also keen to remember the hard-fought and battling point against Solihull on Saturday, in tough conditions.

“Ideally we wanted six points from these two matches, but that wasn’t to be. Against Solihull, most of that game was dictated by the weather and the pitch was tough, but it was a hard earned point and clean sheet in the end so there as positives to take from it.

“We’re at a stage now where it’s about results and not performances, but if I am honest, virtually every game since we have come in was similar to Dagenham on Tuesday night. We could have lost it after they scored on the 80th minute, we had already had chances to go two-nil up and had a big shout for a penalty so it could have fizzled out into a draw or defeat. But, we worked hard and got the win to make it four points from two games.”

Looking ahead to this weekend’s game, the Coasters are back at Mill Farm and will take on Aldershot Town, another team that are towards the bottom of the division. Bentley wants to see his side continue their recent resurgence in front of the home crowd.

“We enjoyed Tuesday but it’s all about the next game now. We’ve had a good week so far and now we want to back that up this weekend against Aldershot. Being back at Mill Farm in front of our own supporters is good for us, we always like to see them and play in front of them, so we hope to see as many as possible down here for a big game and supporting us like they always do.

“Aldershot will be coming here looking to upset us and get the win, but we need to be tough, stand up to it and make sure we can decide the result with how we play. We’ve prepared well and we’re looking forward to it, the lads are chomping at the bit to get back out there.”

Following a hectic fixture schedule, Bentley was asked how his relatively small squad is shaping up injury wise ahead of the weekend.

“We’ve got a few bumps and bruises as always. We’ve got one or two with underlying issues and without going too in-depth, they’ll be looked at when the season ends. We’ve got lads playing through the pain barrier for this club, everyone is willing to battle, fight and show spirit together and that’s created a real togetherness in the group to face every challenge that comes our way.

“Recovery wise, it’s a hectic time with the amount of games we’re playing, there is travelling time in there as well and of course the unpredictable weather. There’s a lot more to take into consideration at this point but the medical staff are doing all they can to do what they need to do to make sure we’re in the best place possible before the next game.”

You can still secure your tickets for the big Vanarama National League clash with Aldershot Town at Mill Farm this weekend.