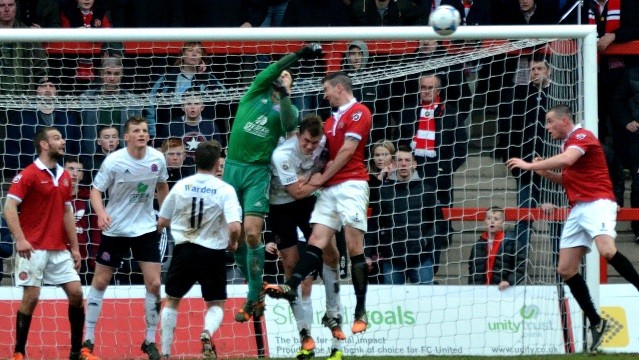 AFC Fylde goalkeeper Ben Hinchliffe admits he was delighted to be back in the side for the 2-1 victory over FC United of Manchester at the weekend.

Hinchliffe had lost his place in Dave Challinor’s starting XI recently to fellow shot stopper Matt Urwin, but was called upon at Broadhurst Park due to injury to his rival.

Hinchliffe pulled off a sensational save in the dying embers of the game to secure all three points for the Coasters and is keen to retain his place in the team.

“It was great to be back in the team because I always want to play. Matt has come in and done very well recently but he picked up a bit of an injury and that gives me a chance now.

“It made it all the sweeter to come back in for such a big game and even more so to come away with three points. A lot of the top teams have struggled there. It can be difficult for lads that haven’t played in front of big crowds before because the ground is right on top of you but I thought we coped with it well.

“Defensively we were very solid and that made it a lot easier for me and we managed the game well. It was important to get the first goal and then Rowey scoring early in the second half relieved a bit of pressure on us.

“They upped the pressure in the last ten minutes after they had scored but they are always going to do that when they are chasing the game.

“I didn’t really have that much to do throughout the game so I try to keep myself busy talking to the lads and organising them and making sure I’m always switched on. In a quieter, less intense match sometimes it’s more difficult to stay alert, but not in an atmosphere like that.

“I definitely want to keep my place now. Matt will tell you the same thing, we both want to play. Matt’s a good keeper and he’s just unfortunate to get injured. It’s my job now to make it as difficult as I can for him to get back in.

“We both bounce off each other well and do whatever we can to help each other out. We are both here for exactly the same reason, we want to get Fylde promoted.

Fylde moved up into second place in the National League North following a third consecutive victory and Hinchliffe wants to push leaders Solihull Moors all the way.

“If I’m totally honest I don’t think Solihull are going to drop nine points on us now. We still want to push them right to the end and I don’t see any reason why we can’t win every game between now and the end of the season.

“We have a tough run-in, but if we can win nine in nine then it would be a huge achievement and it would put massive pressure on them. We are looking at a play-off place at the moment and we would take that but we still want to keep Solihull on their toes and keep chasing them.”