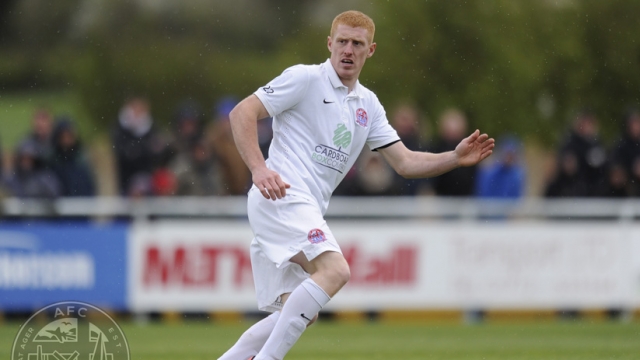 AFC Fylde have paid tribute to Michael Barnes after the striker parted company with the club.

The 26 year-old held talks with manager Dave Challinor and will look for a new challenge after making over 250 appearances for The Coasters.

The former Manchester United youngster joined the club in August 2009 after spells with Shrewsbury, Northwich Victoria, Southport and Halifax Town. Barnes became a fans favourite at Kellamergh Park over the six seasons he played for the club and he made over two-hundred and fifty appearances in all competitions. In the 2014/15 season, he made thirty-five appearances for The Coasters including twenty-nine starts scoring six goals in total, four of those coming in league action.

Challinor said: “Barnesy has been great for us over the three and a half years since  we’ve been at the club and has been a mainstay in the side. Our pace in wide areas is something we’re renowned for and he has been a big part of that.

“Unfortunately, from our perspective we had to make a difficult decision about Barnesy’s future as he’s been out for long periods over the last two seasons with injuries.

“As he was one of our top earners we can’t afford not to not have him involved and this combined with the emergence of Dion and Cory led us to this decision.”

During his time with the club, Barnes won the Players’ Player of the Year and Supporters’ Club Player of the Year awards for two seasons running and was successively named in both the Evo-Stik Division One North and Premier Division teams of the season. He also scored scoring twice and received the Man of the Match award in the Lancashire Cup Final against Chorley when The Coasters ran out 4-1 winners in 2014.

Challinor added: “From Michael’s perspective, due to the nature of his day job, even the travelling to and from training in the evenings was becoming hard work.

“He has a tough job, a young family and getting the balance between football and family is obviously important. He’s not decided where his next challenge is but he goes with our best wishes and with the knowledge he’ll be welcome back at the club any time.”

Chairman David Haythornthwaite said: “Michael has been a terrific servant to this club and has been instrumental in  helping us reach the level we are at today.

“On his day there is no one better to watch. He single handily destroyed Chorley at the Reebok on a night that will long live in the memory for all Coasters fans that were there. It’s sad to see him go but that’s football and we move on. All the best wishes and a big thank you from all of us at Fylde.”