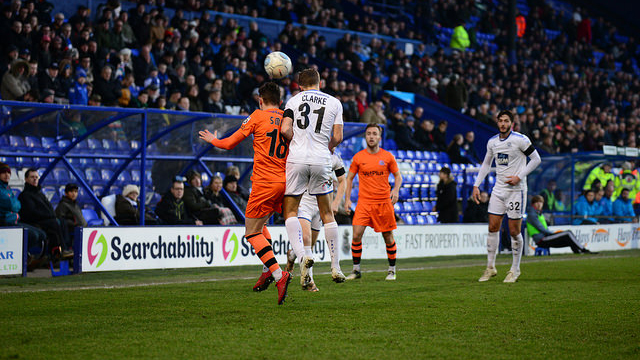 Back to basics for Challinor

AFC Fylde Dave Challinor was frustrated with the manner of the goals during the 4-1 defeat against Tranmere Rovers.

Challinor said: “We didn’t do the basics well enough today and to concede twice from set pieces highlights that.

“On the whole, we played quite well in the first half but I wanted us to come out more positively after the break.

“We did that but they had two shots on our goal in the second-half and scored both. I guess it’s the ultimate clinical performance from Tranmere because we were still well in the game before that.

“We set up with a system to stifle them because we know their threats. We knew Jennings would be a threat and I purposely put people in the areas he likes to drift in to. So for him to score twice was very disappointing and shows people weren’t doing their jobs.

“We had our fair share of chances and were on the front foot for a lot of the game but ultimately we have come away empty handed. On a different day we could have scored four ourselves.

“We do have a few missing, but all teams get injuries and suspensions so we just have to get on with it. Sam Finley was a big miss and he was as disappointed as anyone because he would have revelled in that type of game and environment. Hopefully this will be a little lesson of where he can improve and I’m sure he will learn from it.”