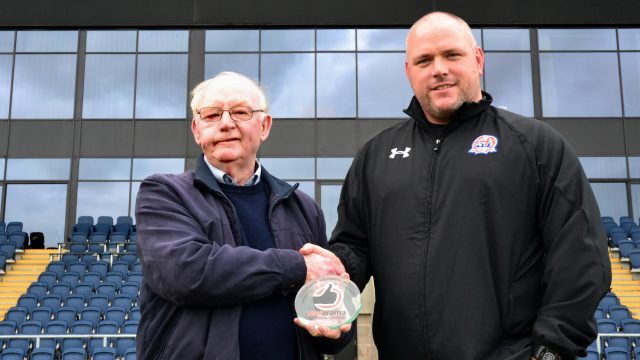 AFC Fylde’s Match Secretary and long-time volunteer Bob Davey has been named the Vanarama National League Volunteer of the Month.

Bob, who turned 79 on Tuesday, has been associated with the club for over 40 years, and has been a valuable member of the club.

He was surprised with his award on his birthday at the club, with Manager Jim Bentley presenting it to him in front of the first-team, who gave a rapturous round of applause for his achievements. “Bob is one of the unsung heroes here at AFC Fylde, and is so important to us,” said Chief Executive Jamie Roberts.

“He performs vital roles on match days and keeps us in line with the league’s regulations – and always with a smile on his face.”

“He has been through a difficult time recently with illness, and had to miss a few games whilst in hospital receiving treatment.”

“Bob was welcomed back with much adoration for our game against Peterborough Sports, and was personally greeted by each of the players, as well as applauded by the fans before the game.” “His determination, selflessness and kind nature is matched only by his love of the club and his local community, and non-league football is all the richer to have a gentleman like him involved.”

Bob will be back at it again tomorrow for the Coasters trip to Nantwich Town, as he performs the all important secretarial roles for the FA Cup.

The club would like to thank the National League and league sponsors Vanarama for the award, and congratulate Bob on his achievement.