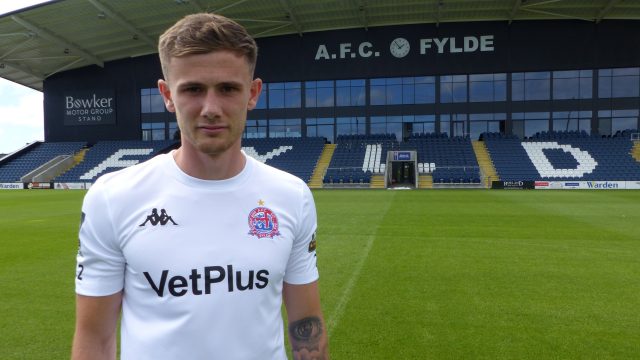 AFC Fylde have completed their ninth summer signing – 21-year-old right back Arlen Birch joining the Coasters until the end of the season.

Birch started his career at Everton Academy aged just 11, he then became a first-year scholar in the summer of 2013 and often featured in the Under-18s’ title-winning campaign.

In September 2015 Birch joined Burnley as part of their Development Team, despite training with the first team and making various squads things didn’t work out.

When asked about the move Birch commented:

“I enjoyed my time at Everton and Burnley, but I felt the time was right for me to start getting regular football. The club is heading in the right direction and they aspire to go higher which is certainly somewhere I want to be.”

“I am still waiting to make my professional debut and I can’t wait to get that chance here.”

Birch heads straight into the squad for this Saturday’s game vs Bromley.

Tickets for the match are available to purchase on the day. Alternatively, to book online please click here or contact our Ticket Office Manager Gary Scott on 01772 598855.