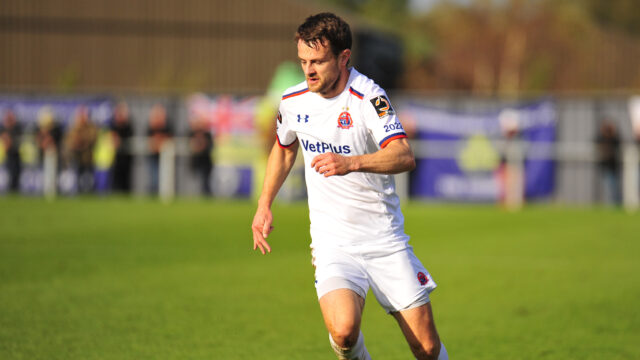 We are delighted to announce that Andy Taylor will remain with AFC Fylde in a coaching capacity, taking on a new-role of First Team Performance Analyst.

Taylor joined the Coasters in October 2019 and proved an instant hit both inside the club and with its supporters.

Unfortunately, the defender ruptured his ACL at the beginning of March during a home match with Notts County. Now at the age of 34, Taylor is still undergoing his rehabilitation period on his injury and the club will be continuing to support him with this, but the focus can now switch to furthering his coaching skills in a new-look set up under Jim Bentley’s guidance at Mill Farm.

Speaking to afcfylde.co.uk, Taylor said: “I’ve officially accepted a ‘performance analysis’ role within the club, which means I will be analysing the opposition, putting together video footage for the manager and the team to see their patterns and style of play. But, also, what excites me about this role is the freedom to dip into other areas as well. I’ll be doing bits of coaching and getting involved in pretty much everything really!

“When the manager [Jim Bentley] and Jonty [Castle, AFC Fylde Chief Executive] first mentioned it and I found out how much experience I could get being involved on match days and in the training throughout the week, it all sounded great to me and now I can’t wait to get going for the new season ahead.”

Jim Bentley was delighted with Andy Taylor’s appointment, saying: “I’ve been really impressed with Tayls since I came to the club. He’s a dedicated individual and a top professional that is highly respected not just at AFC Fylde but throughout football. This new role with give him the opportunity to dip his toes in all departments of the football side of the club.

“He’s nearly qualified as a sports scientist, he enjoys coaching and he will also cover the analysis which I feel is a massive part of the teams development and also its match preparation. Being with us also gives him the opportunity to recover from his ACL injury that he unfortunately picked up in one of the last games before the season ended. I’m looking forward to working with Andy and I’m sure he will be a success for the club.”