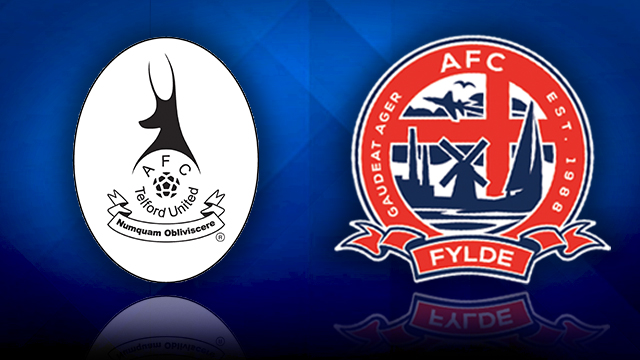 An open game at the New Bucks Head Stadium was decided by a goal of real quality shortly after break as the Coasters earned their first three points of the campaign.

Telford were presented with a fantastic opportunity to open the scoring inside the second minute when Dom Collins was harshly adjudged to have fouled David Hibbert on the edge of the area, however the resultant free-kick from former Coaster Josh Wilson was charged down and cleared to safety.

A clever piece of play shortly before the 10 minute mark almost resulted in the first goal, as a quick throw in was flicked on by Danny Rowe, but Brendon Daniels fired just over from 15 yards.

Telford’s Jack Rea went closer still when he was allowed far too much space to gallop into the Fylde area and forced new keeper Taylor into a fine save.

The match was becoming an end-to-end affair and Coasters centre-half Dom Collins really should have done better when he met Daniels’ whipped corner.

Fylde were the team in the ascendancy as the half wore on and Rowe wasn’t far off with a snapshot from the edge of the box after Daniels’ free-kick was blocked. Great work by the corner flag by Bohan Dixon allowed Matty Hughes space to break into the area seconds later, but his low drive is turned around the post by James Montgomery.

Hughes thought he had grabbed the opener on half an hour after a melee in the Telford box but somehow his goal-bound strike was cleared off the line.

The game drifted harmlessly towards the break and as the clock reached 45 minutes a frustrated Rowe was booked for an accumulation of fouls.

However, the second half burst into life after just two minutes and it was Rowe who twisted and turned 25 yards from goal before unleashing a piledriver into the bottom left hand corner beyond the helpless clutches of Montgomery.

Bucks midfielder Dan Preston should have equalised instantly but somehow fired over from six yards.

The lead was so nearly doubled five minutes after the restart when Daniels delivered a delightful corner from the right however Josh Langley’s header crashed back off the crossbar.

Hibbert was starting to cause Fylde problems at the back and was narrowly over with a header from Lee Fowler’s inswinging free-kick.

Rowe chanced his arm with another thunderbolt of a strike when he latched onto a loose ball 20 yards from goal, however his effort whistled wide of the right hand post.

Telford continued to push on for a leveller as Wilson fired a set-piece well over the bar but the Fylde back-line was holding strong.

The Bucks had claims for a penalty with just three minutes to play when Langley challenged former teammate Wilson however the referee was unmoved.

Debutant George Newell was brought on in the dying stages and the Coasters held out until the final whistle for a valuable three points.