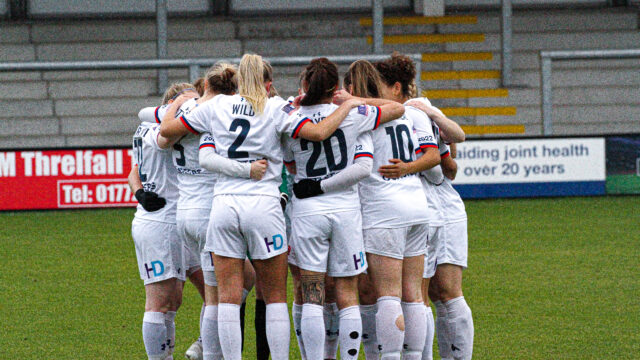 AFC Fylde Women’s team uplifted by the return of football

AFC Fylde Women have not kicked a ball since the suspension of ‘non-elite’ football in January, so news that the Women’s FA Cup will resume at the end of March has been welcomed with open arms.

Joint managers, Kim Turner and Danielle Young are now turning their focus towards their second-round tie at Burnley on 4th April. The third and fourth-round fixtures have also been drawn, which could see The Coasters host Sunderland or Sheffield FC – and if victorious – WSL outfit Manchester United.

Danielle Young told afcfylde.co.uk that the news has given everybody a huge lift, after what has been a challenging period without football:

“All the girls have been working really hard at home for the past four months, so the news has enlightened them and given us all something to drive towards. We are still waiting on news about the league, but just having the Burnley game in sight gives us all something to work towards. It’s really uplifted the girls. They have all been waiting so long for this. None of us expected to be away from football for this long.

“Last season ended with null and void after we had played just over half the season. We then came back into this new season and again football has been taken away from us because of another lockdown. It’s been a long time waiting for the girls. You can see from their reaction on social media that they can’t wait to be back out there on the pitch.”

The re-enforcement of strict government guidelines has also prevented the team from training as a group, meaning the players and management have had to find new, innovative ways to communicate and keep themselves engaged. Danielle spoke passionately about the importance of keeping in touch:

“Me and Kim have kept in contact throughout the break and worked really hard to send programmes out to the players to keep them active. A lot of our girls are still working, so they have other things to be doing to keep them occupied. The communication between ourselves and the girls has been key, making sure we keep in contact with them through zoom calls every week. Every Tuesday and Thursday we have a zoom call – which is our training days. So in the evenings that we would usually be training, we jump on the video call to see each other; we have a little chat, and then we do HIIT sessions together. That has been our main way of keeping in contact and really helped keep everyone mentally engaged.

“The programmes we designed were not just based around fitness, but also ball work and mini-training sessions to ensure we covered all aspects. It’s been very difficult because the girls have only been able to train within themselves. A lot of them either live with parents or living alone, so we’ve had to tailor the programmes. They all seem to be working extremely hard and completing the programmes, and we’ve had some really good feedback from them all.”

The Women’s FA Cup is an opportunity for National League clubs like Fylde to test themselves against the best. For Kim and Danielle, two ex-players, the FA Cup is a competition that gives players the chance to dream.

Kim said: “The amazing thing about the FA Cup is that it’s a competition where anything can happen and anyone can beat anyone – it’s very similar to the men’s competition in that sense. I had a really memorable FA Cup experience with Blackburn Rovers as a player when we reached either the quarter-finals or the semi-finals. We beat Charlton away, who at the time were classed as one of the best teams in the premier league, and we went on to play Brighton away. It was the first time that a National League team made it to that stage in the competition, so to be a part of that was great.

“Our first focus is on Burnley and winning that. A lot of teams in our league don’t progress much further than the first few rounds because the professional teams enter which makes it difficult, but our target is to get to that Manchester United fixture. That would be an amazing occasion at Mill Farm, with potentially some TV coverage.

The Burnley preparations will have to be placed on hold until the guidelines are relaxed, leaving only a short period of time for the duo to get the players ready for the fixture. Kim explained “We usually train twice a week, but we will be putting an extra session on in the build-up to the Burnley game. The first session will all be about getting the girls back together, brushing the cobwebs off and getting them back on the ball without anything too intense. On the Tuesday we will touch a bit on us, how we are going to play and recap on things that we have done really well in the first half of the season. And then on Thursday, we will have a look at Burnley and how we expect them to play.”

Uncertainty around the league still lingers, as discussions proceed behind-the-scenes, but Danielle is hoping for some clarity soon:

“We have been in contact with the league recently to discuss various things. We completed surveys similar to how the men did, to determine how the league would finish. Our options were to null and void the season; to apply points per game or to continue this season with a threshold.

“With the position that we are in and the form that we showed in the early stages of the season we were all for continuing. Everything has now been passed over to the Female Football board, meaning it is out of our hands now. We are expecting to hear something back on the 15th March in terms of how it’s going to be completed or not. We have big plans this season, so we are hoping that we are able to continue.”

The Women’s FA Cup Second Round tie versus Burnley will take place on Sunday 4th April at Arbories Memorial Sports Ground in Padiham. Please note that this is a behind-closed-doors fixture.