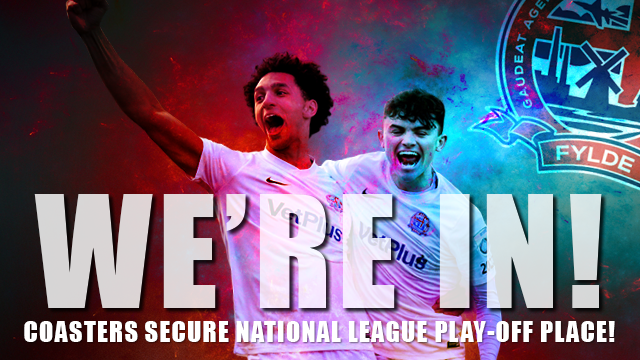 AFC Fylde have secured their place in the Vanarama National League play-offs following this afternoon’s goalless draw at Wrexham.

The Coasters will now travel to fourth-placed Boreham Wood in the Eliminator Round for the right to play Sutton United in the semi-finals.

The match against Boreham Wood will take place on Thursday 3rd (kick-off 7pm) with the semi-final scheduled for Sunday 6th (3pm).

Aldershot Town will host Ebbsfleet United in the other Eliminator Round with the winner taking on Tranmere Rovers in the semi-final.

The Promotion Final is held at Wembley on Saturday 12th May.

All play-off matches will be broadcast live on BT Sport.

Ticket details to be announced shortly.