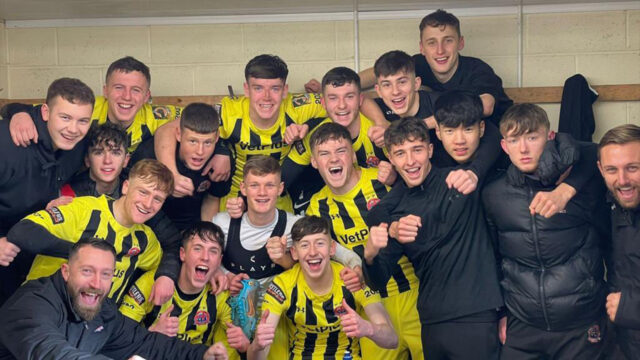 Before a ball has even been kicked in the 2021/22 U18 Lancashire County Cup final, we are thrilled to announce that AFC Fylde Academy will inevitably be crowned the 2021/2022 season Champions!

A date is yet to be confirmed for the historic cup final, where two teams from the same club will meet at the Lancashire County Ground for the first time.

AFC Fylde U17’s will take on their elder counterparts AFC Fylde U18’s in what will be an all-AFC Fylde Final.

Led by Conrad Prendergast, the U17’s have faced some tough and more experienced opposition during their journey to the final.

Most notable was their Semi-Final win over Clitheroe FC, where a strong and more mature Clitheroe side controlled the majority of the first 45 minutes and forced goalkeeper Cian McPartlan into several smart saves to keep things level at the break.

The spirited team performance in the second half was the difference. The players celebrated and praised every header, tackle and chance created, which saw a swing in the dynamic of the game before Connor McCauley latched on the end of a Harry Hodgeson cross at the back post to give them the lead.

A tense and hard-fought remaining 10 minutes saw Clitheroe push for an equaliser, but it was brief, as Keane Joyce executed a pin-point pass to his midfield partner Taylor O’Kane, who calmly controlled and finished to send the players into raptures

Their route to the final:

First Round:
Thornton Cleveleys U18 (H)
Home Walk Over

U18 gaffer Stephen Dobbie has led his team to a cup final in his first season at the club. The AFC Fylde player and Academy coach has been a fantastic addition to AFC Fylde since making the move to Mill Farm in August 2021.

He has played a key part in the first team’s push for promotion to the National League in the early part of the season before a long-term injury has kept him out of action.

During that period, ‘Dobbes’ has continued the fine form of this group following their North West Youth Alliance (NWYA) Trophy win last season and hopes for more silverware for his team.

The U18’s continue to compete in the NWYA this season and currently sit in fourth with six games in hand and are pushing for another successful season in the competition.

During their route to the final, the U18’s are yet to concede. They have also netted 18 goals. Players such as Will Riding, who has 29 appearances, four goals and 30 assists this season in the Northwest Counites for Charnock Richard and Longridge Town, provides plenty of quality and experience to Stephen Dobbie’s squad.

Their route to the final:

It is not the first time in recent seasons that AFC Fylde Academy have made Club and Cup history. Just short of 12 months ago, they would go on to dramatically beat CAT 2 Academy side, Cambridge United in the FA Youth Cup Third Round to set themselves up for a mouth-watering tie against Academy giants Chelsea after dismantling six teams along the way, including three Football League clubs.

We caught up with Academy Manager Chris Ganner, who reflected on the past year, and looked ahead to another Historical moment for the club.

“Last season’s remarkable run in the FA Youth Cup was something we are all very proud of,” Ganner said.

“It certainly made fantastic memories for the Club, players and staff involved in the run.

“We have won the Lancashire County Cup three times in the last five years, and to have two teams in the final reiterates our position as one of the strongest Academies outside the Football League in the North West.

“All of our teams are close to winning their respective divisions, and many boys are enjoying success on loan for non-league first teams on a Saturday afternoon.”

A date for the final is yet to be confirmed, but everyone at AFC Fylde would like to wish both sets of players the very best for the all AFC FYLDE FINAL.