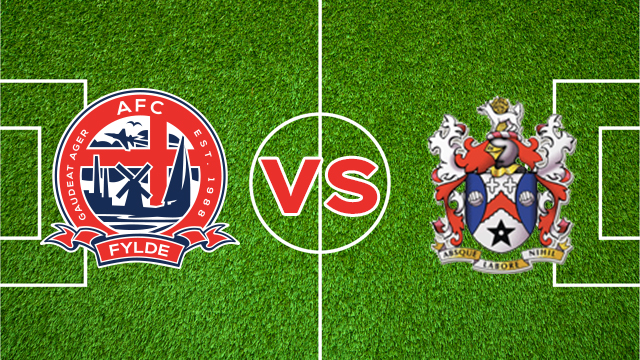 The Coasters took all three points with a 3-0 victory in a close knitted game against Stalybridge Celtic.

It turned out to be a routine win for Fylde on a cold, wet December afternoon. Three goals separated the two sides and they came through Danny Lloyd, Richie Allen and Danny Rowe.

It was the away side who started the brighter, but the opening goal came after 10 minutes when a ball in from the left hand side from Adam Sumner found Danny Lloyd unopposed and he found the back of the net with relative ease.

The goal really spurred The Coasters on, and ultimately the home side controlled most of the possession in the first part of the game. Jamie Allen went close as he was played through one on one with the goalkeeper but his effort was palmed away and soon after, Danny Lloyd headed wide from a good position.

Stalybridge had a good chance to equalize when the ball fell to Matthew Regan just outside the area, but he blazed just over from around 25 yards in what was the away side’s best chance of the first half.

Just before the half time whistle, Joe Booth was brought down on the edge of the area and subsequently, Stalybridge’s Jordan was booked. Josh Wilson stepped up to take the free kick and he rattled the crossbar from 30 yards out.

The away side started better in the second half, a Stefan Galinski header that went just wide and then a Ben McKenna effort forced a good save out of Hinchliffe was followed shortly by a mix up at the back for Stalybridge allowing Jamie Allen in behind, but his effort was saved before the rebound from Lloyd was kept out.

The Coasters were unlucky not to add a second goal after Jamie Allen, Lloyd and Sumner all went close within a minute of each other right before the second goal which effectively saw off the game went in.

The second goal was a powerful diving header by Richie Allen on 63 minutes after Lloyd did well down the right and played in a superb ball to the former. Lloyd had a great afternoon which ended in him being named Man of the Match, as he grabbed one goal and one assist.

With 15 minutes left, Holsgrove had a fierce 30 yard effort just wide for the away side which was the closest they came to scoring in the game. The away side had a fair bit of possession but ultimately couldn’t do anything significant with it.

Substitute Danny Rowe sealed the three points with an 84th minute goal from a couple of yards out and the result was in the bag. Youngster Cory Bent came on with five minutes remaining for his home league debut, much to the delight of the fans and staff alike.

Stalybridge played their part in a good game of football, but on the day, The Coasters were too strong for their Conference North opposition.

Coasters boss Dave Challinor added: ‘’we deserved the win for a professional performance and we go into the game next Saturday against Gainsborough in the FA Trophy with a win behind us. When we’re on our game, it’s hard to stop us and Stalybridge probably felt that today’’.

There will be more to come from Chally in the coming days.

Man of the Match – Danny Lloyd