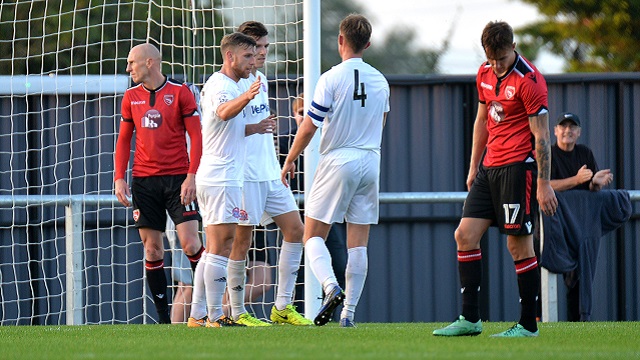 AFC Fylde manager Dave Challinor was pleased see a number of his players come through 90 minutes for the first time during the 2-1 victory over Morecambe last night.

Goals from Danny Rowe and Jordan Tunnicliffe helped the Coasters see off their League Two opposition and Challinor believes his players will benefit from the extended run out.

Challinor said: “It was a tough test for us because that was the first 90 minutes that the majority of the lads have played. They will be sore today but they will benefit from it massively.

“The recovery over the next day or so is very important now. We are only one game and six or seven training sessions away from the start of the season.

“We are looking strong but we aren’t getting carried away just yet. The goal we conceded comes from tiredness because they broke away quickly from our initial attack.

“We had to really dig in for the last 15 minutes and the lads had to push themselves beyond what they have done so far this pre-season.

“There were more good signs, as there have been over all the games so far. We still haven’t worked on the defensive side massively yet but they are all good players and they communicate well so that is very positive.

“We will do a lot more defensive-based work over the next week and that will continue throughout the season. Being full-time allows us to do that.

“We have a young group and they will inevitably improve game by game in what will be a tough division for us.”