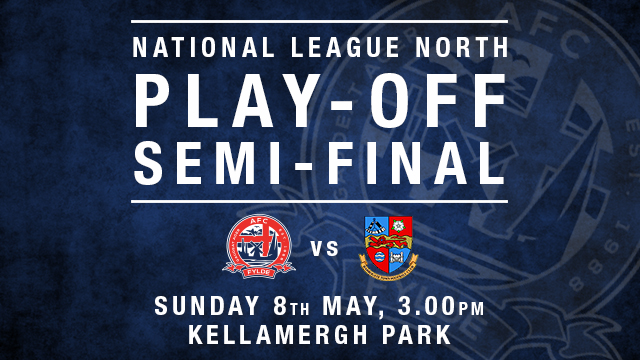 AFC Fylde and Harrogate Town go head-to head for third time in a fortnight on Sunday in the second leg of our play-off semi-final.

The Coasters head into the match with a narrow advantage following Wednesday night’s 1-0 victory at the CNG Stadium.

Danny Rowe fired home a second half winner to put Dave Challinor’s side in the driving seat and they will be keen to finish the job at the weekend and banish last year’s play-off heartbreak.

Despite enduring a sticky spell towards the end of the season, Harrogate sealed their place in the play-offs on the final day of the season.

They headed into the semi-final against ourselves on the back of a comprehensive 5-0 victory over relegated Corby Town, but have some work to do this weekend if they are to progress any further.

A 15th placed finish last season has been well bettered this time around as they sealed fourth place in the National League North.

Today’s teams have enjoyed three close encounters against each other so far this term. The first was a 2-2 draw back in November, before Fylde won 2-1 two weeks ago at Kellamergh Park.

The third meeting was of course Wednesday night’s nervy play-off fixture that Fylde edged with Rowe’s 37 goal of the season.

Town goalkeeper Peter Crook was named man of the match on the day and manager Simon Weaver believes the stopper may just have kept Harrogate in the tie.

Top scorer Brendan Daniels’ two goals on the final day of the season brought him to 22 for the league season, just two behind the Coasters top scorer Rowe in the NLN charts.

Elsewhere, Boston United will take a two-goal lead into their semi-final against North Ferriby United after a solid 2-0 home victory on Wednesday. Boston were also knocked out at this stage last season but are in a strong position ahead of their trip to the Eon Visual Media Stadium on Sunday.

Added info:
> Away goals do NOT count.

> In the event of the aggregate scores being level at the end of 90 minutes, extra time will be played. The team which has scored the most goals will be declared the winner at the end of the two periods of extra time. If the tie is still undecided after extra time the winners will be determined by the taking of kicks from the penalty mark.

> The final will be held at the home ground of the highest placed finalist on Saturday 14th May, 2016. 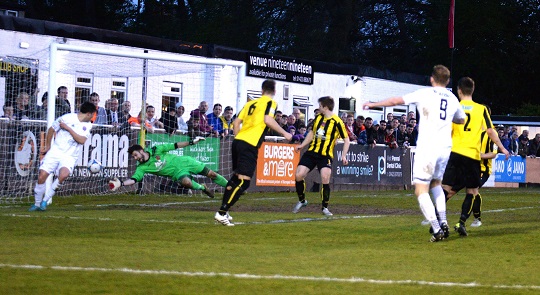 What’s on:
> The ground opens at 12noon on Sunday for live music and entertainment and pints of Fosters are priced at just £2!

> Don’t miss your limited edition souvenir matchday programme available inside the ground for just £2! Crammed full of interesting articles and photos, this is one issue not to be missed!

> Also available is the match day 50/50 which is growing in value by the week and gives you the chance to win a big cash prize!