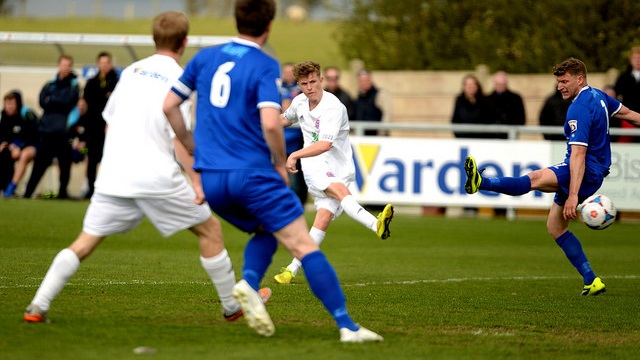 AFC Fylde starlet James Hardy admits he was relieved to exorcise a few demons with the decisive goal in a 2-1 victory over promotion rivals Harrogate Town at the weekend.

Fylde leapfrogged North Ferriby United, who were beaten away at Gloucester City, into second place in the National League North table, however Ferriby still have a game in hand in the race for the runners up spot.

Manchester City graduate Hardy fired home the second goal of the game on Saturday and was delighted to be back on the scoresheet.

“My goal ended up being the winner so it was quite important and I’m delighted.

“Some people were saying that it took a deflection but I just gave the keeper the eyes and slotted it in – definitely no deflection!”

Fylde returned to winning ways following defeat at Tamworth the previous week and the 19-year-old midfielder insisted that the Coasters were good value for the points.

“I thought we played very well. The first half was a bit scrappy and nobody had much time. They were tight to us and we were tight to them, but it opened up a little bit more in the second half and we had more space to play.

“They had one of their better players missing, but we had a few out too. Overall I thought we were the better team and we certainly deserved to win.”

Fylde could potentially face Harrogate again in the play-offs next week and Hardy would welcome another match against the Yorkshire outfit.

“It could give us a psychological edge and some added confidence that we can go out and beat them. They haven’t beaten us this season so that might play on their minds. On our day we would back ourselves against anyone so we’ll just wait and see who we get.

“I’d fancy our chances against any side we end up playing. I think we are the best team in this league so I’m not really fussed.”

Hardy has been in tremendous form over the season run in and is now keen to retain his place in Dave Challinor’s plans.

“I’m glad that I’m playing a lot more football now and my fitness is improving all the time. When I first joined I was in and out of the team and I had a few little injuries but the last couple of months have been great. I want to stay in the team and help us go up now, that’s the aim.”