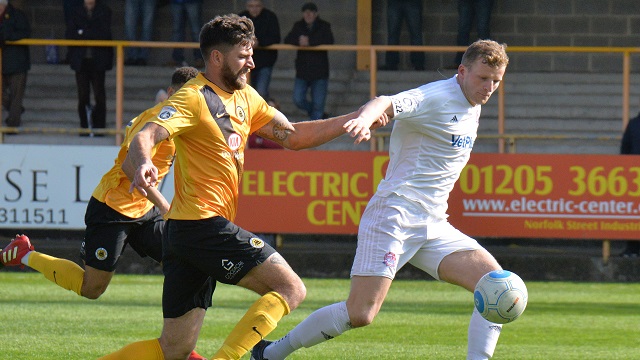 Prolific striker Danny Rowe admits he was ‘buzzing’ after AFC Fylde secured the National League North title at the weekend.

Rowe netted twice in the decisive 3-0 victory at Boston United on Saturday as the Coasters were crowned champions with a game to spare.

The 28-year-old frontman, who is now just one short of 50 goals for the season in all competitions, was keen to emphasis the enormity of his side’s achievement.

Rowe said: “Obviously we are all buzzing. It really is a massive achievement for the club, players and staff alike.

“We went to Boston to do a job and we got it done very professionally. We could have perhaps got it done sooner but it doesn’t make any difference now.

“I’m so pleased for everyone – the players, staff, manager, chairman – it’s huge for us all.

“I wasn’t nervous before the game. There was probably less pressure with us being away from home.  There was a better feeling within the group than there was last Monday at home against Bradford. We felt like we had let ourselves down and we knew what we had to do.

“We started the game well and got the ball into good positions and put Boston on the back foot. We scored the penalty and keep doing the same things.

“I’m the penalty taker here so when Brendon went down I knew which way I was going straight away. I knew if I got the power and the accuracy that I wanted then he wouldn’t save it.”

Rowe has been somewhat of a record breaker this season with his phenomenal goalscoring exploits and helped his side smash yet another milestone at the weekend. His second goal at York Street – Fylde’s 104th of the campaign – surpassed the record for most goals scored by one club in a National League North season, set by Chester in 2012-13.

Now he has his eyes firmly fixed on another record – much to the dismay of a close friend!

“One of my mates, Richie Allen, keeps ringing me up because I’m not far behind his overall goal record for the club (Rowe is just three behind the 119 scored by former Coaster Allen).

“I’m going for that record now so I’m sure he will be on the phone again before Saturday asking me to go easy! That’s the next record I want.”

Fylde will get their hands on the league trophy at the weekend when Worcester City are the visitors to Mill Farm and it’s an occasion that Rowe is relishing.

“The trip home and the atmosphere on the coach was fantastic. We will have a good week now looking forward to Saturday.

“We still need to put on a show as champions for everyone who pays to come and watch, but all the pressure is off us now so we can relax.

“It will be fantastic to get the trophy in front of our own fans.”