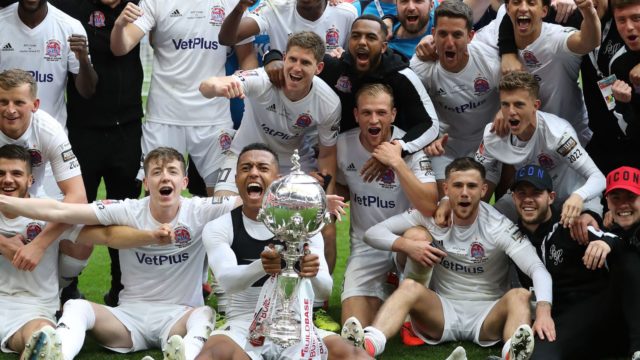 After last weekend’s battling performance at Bramall Lane in the FA Cup Third Round, the Coasters are back in action in another FA competition.

Southport will be the visitors to Mill Farm in what is gearing up to be a great tie – with Southport aiming for promotion in the National League North.

New signing Tom Walker will not be available having already played for Stockport in the competition, whilst Matty Kosylo is still out through suspension.

This weekend is set to be the first meeting between the two sides, meaning it’s a first visit to Mill Farm for the Sandgrounders.

The tie will be settled on the day, meaning, if needed, it will head to extra time and penalties.

It’s interesting to note as well, that if Notts County and Dagenham draw at Meadow Lane, Tuesday’s fixture with The Magpies will be postponed for that replay. Southport are local to the Coasters and are enjoying a decent run in the league this season with the Yellows sitting just outside the playoffs.

They currently play in the Vanarama National League North, with Liam Watson at the helm. He was appointed as manager in May 2018, after a stint on the board of directors.

This is Southport’s fourth game in the competition this season. They entered at the third qualifying round beating Colne, before winning a first-round replay against South Shields.

One To Watch: David Morgan A name familiar to Coasters fans, the former player captains the Port, and leads the goalscoring charts this term, with ten in the National League North.

He joined the Coasters from Nuneaton Borough in the 2016/17 season, and made seven starts in the promotion winning team, before moving on in the summer.

He’s made 28 appearances this year for Southport, and his new found goalscoring form will be integral in their chances of a win at Mill Farm.

As the FA Trophy continues, this means there is only one game in the National League to watch out for, but there are plenty of games in the Trophy to keep an eye on.

Barrow Vs FC United of Manchester

There will be full match commentary on Coasters live with your commentary team of Jack Connor and Callum Foster.