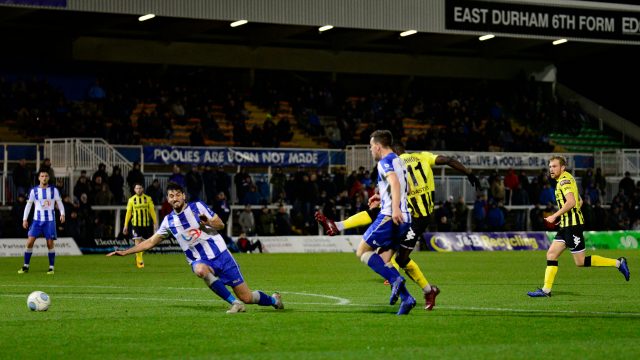 After back-to-back home games, the Coasters are back on the road this evening – making the trip North-East to Hartlepool United.

Meanwhile, The Pools have arrested a run of early poor form, winning their first game of the campaign, away at Maidenhead United on Saturday with a 1-0 win.

The Coasters have enjoyed their visits to Victoria Park, winning on both occasions – last time courtesy of a debut strike from loan signing Arthur Gnahoua. Amongst other things, it was a season of instability at Hartlepool United, with the North-East side having no less than three managers throughout the campaign.

Craig Hignett eventually took the reins, overseeing the end of the campaign that both Matt Bates and Richard Money couldn’t complete.

Hignett has been busy on the transfer front, with Kabamba and Molyneux returning permanently – whilst the likes of Mafuta (Salford), Killip (Braintree Town) and ex-Coasters forward Game Toure (Sutton United) have also been added.

Nicke Kabamba is an injury doubt this evening, following an injury that saw him replaced in the first half of their win at the weekend.

A name that’ll be familiar to Coasters fans, Toure joined Pools in the summer, after his deal at Sutton United came to an end.

A livewire who can play anywhere across the front three, Toure’s natural pace and unpredictability can make him a real nuisance. He’s already scored once this season, notching against his former side Sutton United on the opening day, and would relish the chance to do that again tonight.

Toure scored four times for the Coasters in 19 appearances, and started this fixture last season, in what proved to be his final start for AFC Fylde.

In the four previous counters between the sides, it’s been one way traffic for AFC Fylde.

The Coasters have won three of the four encounters, with the other one being a draw.

There’s another full schedule tonight in the National League.

Here are some the games we’ll be keeping an eye on:

You can view all fixtures at www.thenationalleague.org

To listen in to the commentary, head to www.mixlr.com/afcfylde from 7.15pm.

Come on you Coasters.