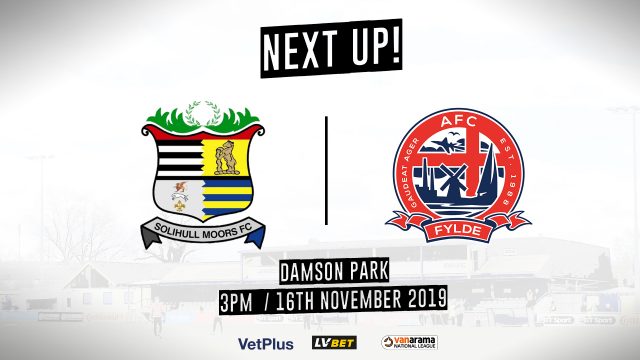 In association with LV Bet

Jim Bentley will take his side to the Midlands on Saturday, where they will face Solihull Moors in the Vanarama National League.

This will be Bentley’s third away game in charge of the Coasters, after a draw away to Maidenhead and a win away to Nantwich ensured he still holds an unbeaten record as Coasters boss.

Bentley will be hoping his side can take all three points this weekend to push them up the Vanarama National League table. A good start to the season for the Moors and a recent flurry of wins has seen them push up the table and occupy a playoff place in the Vanarama National League.

After finishing second last season, the Moors will be happy with their start to this season, with the Birmingham side sitting just three points off Bromley at the summit.

Still in charge of Solihull is manager, Tim Flowers. After guiding them to that top two last season, Flowers strengthened his side with the signing of prolific goalscorer Paul McCallum in the summer, hoping he can fire them to promotion. Currently, he is the side’s top goal scorer with five goals.

Flowers and his team will be wary of the Coasters this weekend, as Jim Bentley has steadied the ship at Mill Farm since his arrival – keeping three clean sheets out of four. This week’s one to watch is the aforementioned Paul McCallum.

McCallum signed for Solihull in the summer from Eastleigh, after enjoying a terrific goal scoring season – scoring 26 goals in 38 games.

He revealed in the summer that he turned down eleven different contract offers – including teams from the EFL – to join Solihull Moors.

Now, 20 games into the season, McCallum has made only 10 appearances for the Moors, but in those appearances, he has managed to bag himself five goals – on average a goal every two games.

McCallum will be going into Saturday’s game full of confidence, after scoring 3 goals in his last three games – two of which came in last weekend’s FA Cup victory over Oxford City. The two sides have met numerous times over the years – with this weekend’s game being the 12th meeting.

With the Coasters only being able to move up two places in the league, there are only a select few games for fans to keep an eye out for.

There will also be full match commentary on Coasters Live.