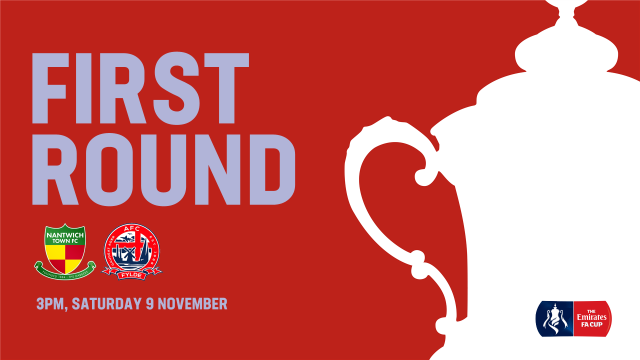 A break from league action allows the Coasters to turn their full attention to the FA Cup first round proper, as we travel to Nantwich Town.

The excitement that The FA Cup brings everyone is sure to be rife in the the Fylde camp, as Jim Bentley faces his first FA Cup match as AFC Fylde Manager.

It’s also an exciting time for Matty Kosylo, who returns to face his former club for the first time since leaving the Dabbers at the end of the 2014/15 season. Nantwich Townwere founded in 1884 and play in the BetVictor Northern Premier Division – which is two leagues below the Coasters.

The Dabbers have had a good start to the season, with the side sitting 10th in the Northern Premier – just two points off the playoffs.

In charge is manager, Dave Cooke. He was appointed the manager of Nantwich after Phil Parkinson left the club to pastures new after his successful stint at the club.

Cooke has done well since taking over the Dabbers, with last season being the most noticeable. He guided them to a fourth-place league finish, where they lost the semi-final of the playoffs.

With the Coasters being several leagues above them, a great victory against King’s Lynn will spur the Dabbers on come Saturday. There will be some familiar names involved in The Dabbers side this weekend, with three former Coasters players in the mix.

Caspar Hughes and Josh Langley both started in the Dabber’s 1-0 win over King’s Lynn in the Fourth Qualifying Round, whilst Sean Cooke was an unused substitute.

Meanwhile, Troy Bourne will be full of confidence coming into the tie – the full-back kept a clean sheet and netted the winner to send the Dabbers into the first round.

Old rivals in the Northern Premier League, this will be the seventh competitive meeting between the two sides.

The record slightly favours the Coasters with two wins, however a draw has been the order of the day on more than half of the occasions.

The last meeting took place back in November 2013, with Nantwich record a 2-1 win at Kellamergh Park.

Danny Lloyd’s early opener was overturned by two second half goals, on an evening where Caspar Hughes lined up for the Coasters. As the First-Round proper gets underway this weekend, there are a few games to keep an eye on for potential upsets and opponents, providing we progress.

(Kick-offs are Saturday at 3pm unless stated)

There will also be full match commentary on Coasters Live, which starts at 2.30pm.