Tomorrow’s tie against Chesterfield marks the start of seven out of eight of our next games being at Mill Farm, and the chance for the Coasters to build momentum in both the National League, and FA Trophy.

The visit of Chesterfield will no doubt be a tough test, however, as the Spireites have enjoyed a fortunate upturn in results, as John Sheridan looks to alleviate worries of a third successive relegation for the club.

Having suffered back-to-back relegations, Chesterfield dropped into the National League this season with the intention of heading straight back to the promised land.

However, as other league clubs have found out to their peril, the league is a tough and often unforgiving one. After going on a record-breaking undefeated, winless run, Martin Allen eventually left the position of Manager at Chesterfield, with the club looming close to another drop.

John Sheridan took the reins once again in January and has recently seen a positive upturn in results.

One To Watch: Marc Antoine-Fortune

The veteran attacker scored 10 Premier League goals in his time with West Bromwich Albion – but it’s this season that the forward has produced his best haul in English football.

He has six so far this season in the league, which leads Chesterfield’s scoring charts. He’s made just 13 starts, with six appearances from the bench, which makes his goal return even more impressive.

This is Chesterfield’s second visit to Mill Farm this season after the Spireites knocked the Coasters out of The FA Cup back in October. 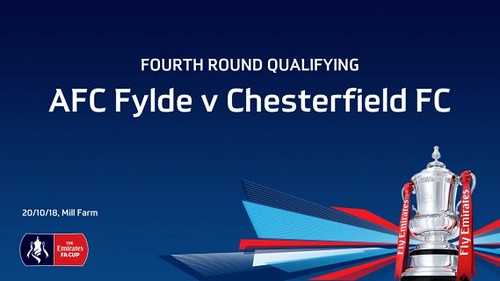 This followed on from a 0-0 draw at the Proact Stadium earlier that month – so the Coasters will be hoping that its third time lucky for the win.

“It’s the time of the year where you have to be able to flit between competitions”@AFCFylde boss Dave Challinor thinks they’ll be able to turn their attention back to league matters this weekend after FA Trophy success#bbclancssport #bbcfootball pic.twitter.com/XTdIDl6I7v

Saturday’s National League fixtures see a lot of ‘top versus bottom’ style clashes, where teams chasing the top spot will be expected to take three points.

Coasters fans can follow the action on the radio, with a broadcast from both Fylde Coast Radio, as well as our usual coverage on Twitter.