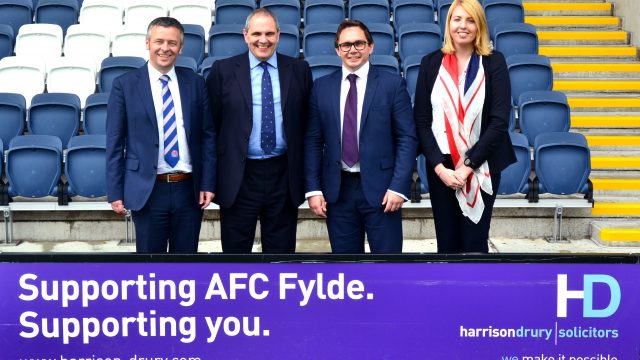 The agreement marks the latest chapter in the firm’s growing relationship with the National League club which started in 2016.

The firm has previously acted on a wide range of commercial legal matters for The Coasters, as well providing sponsorship to the club.

Kris Midgley, business development manager for Harrison Drury, said: “Running a football club is complex and we’re delighted to be operating in an official role to help in areas including property advice, regulatory matters, employment law, and commercial litigation.

“In addition to pitch-side advertising, and match sponsorships, we have more recently become the club’s shorts sponsor, which we’re continuing next season. It’s a growing relationship.

“It’s great to be officially part of the team and we’re confident that our work off the pitch can help make it possible for them to succeed on the pitch as they target promotion to the Football League.”

Jamie Roberts, chief executive of AFC Fylde, said: “Harrison Drury is one of our key partners and the team does fantastic work, providing advice that assists in the smooth running of the club. It’s great to have the team’s backing for the upcoming season and recognise the firm as our official partner.”

AFC Fylde narrowly missed out on promotion to the English Football League last season after reaching the National League play off final at Wembley. However, the club returned to Wembley just a week later to lift the FA Trophy after beating Leyton Orient in the final one nil.

Harrison Drury has offices in Preston, Clitheroe, Garstang, Kendal and Lancaster and offers a full range of commercial and personal legal services.

Harrison Drury is an award-winning North West law firm with offices in Clitheroe, Garstang, Lancaster, Kendal and Preston. It employs around 120 staff.

The firm advises a wide range of corporate and commercial clients including large organisations, SMEs, owner-managed businesses and high-net-worth individuals. It also has a Home & Family division specialising in family law, wills and probate, and residential property.